Posted on August 2, 2012 by familyencouragement

The most turbulent years of our lives are usually those when we were in middle school (it was called Jr. High when I attended), but some of my best and most memorable years were during that era.    I had some great teachers and coaches and made lifetime friends at Roy Stone Jr. High School.

My favorite class was Phys Ed (led by Joe Bob Chandler and Steve Patrick, good men that influenced my life).   It was during this class that I was introduced to running track.   One of the memories I still have is the 440 relay.   It featured four runners that each ran once around a quarter-mile track in their lane carrying a small baton and then passed off their baton to the next runner that also ran another quarter mile and then handed the baton to the next runner until the final leg when the last runner crossed the finish line.

Each runner has a section of the race to run, but the race is not over until the last runner
crosses the line holding the baton securely.    I have been told that the trickiest part of a relay race is the exchange of the baton between runners.   It is called the “baton zone” or the “transfer zone” and must be done quickly and smoothly as there is a designated space of less than 20 meters where the baton can be passed.   If the transfer is not done successfully within that designated area the team is disqualified.

This exchange of the baton is one of the best illustrations of establishing a godly legacy in the lives of your children (or your students, the players you coach, or someone you are mentoring).     Remember that a “legacy” is anything that is handed down from the past or those that are in front of you.   Institutions (churches, corporations, businesses), nations, schools, and athletic teams all have legacies.   I believe, without question, the most important legacy is the one you pass on to your family.

Sometimes parents do their best (no parent is perfect at this) to pass on the baton and the child does not receive or accept what they are offering.   And sometimes it is the fault of the parent that, at best, makes a sloppy and unskilled attempt to pass on God’s ways or, at worst, doesn’t try at all.

One of the most powerful benefits of being careful and intentional in passing down a godly legacy is that your children learn how to do the same when they have their own children.  Your efforts are perpetuated from generation to generation.    The result is that you make a lasting and positive impact that outlives you and ultimately have the potential of blessing thousands of lives.

Here is a sobering reality – a legacy is inevitable.   Every person leaves a legacy that is seen in their descendents, either good or bad.    What kind are you endeavoring to leave in the lives of your children and grandchildren?

If we want to leave a legacy that is a blessing to the generations after us then we must pay attention to the “transfer zone” when the baton is passed to those running after us.  Remember, this section of the track is limited and not very long.    Likewise, the time we have to pour into the hearts of our children is limited and must be done with great care and focus.    In future posts, I’ll share some ideas of what to include during this fleeting and precious time in the lives of our children.

Here are some suggestions for reading if you want to learn more about making the most of helping your children most effectively in the “transfer zone”.     Both of these books have been a great blessing and help to me.    The first one is “Shepherding a Child’s Heart” by Ted Tripp.    It’s a classic that focuses on addressing a child’s heart which is at the root of his behavior and, if done (and received) properly, will result in lasting change in the life of your child.     A second book is called “Age of Opportunity” by Paul Tripp (the authors are brothers).     The strength of this book is that it focuses on parenting teenagers, especially those that are struggling.    It is a great encouragement and both are filled with Scripture and very helpful.    Paul Tripp’s web site is http://www.paultrippministries.org. 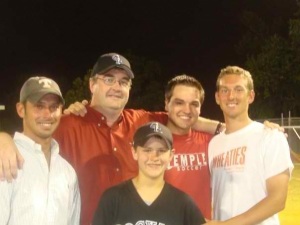 Pastor of Friendship Baptist Church in Huntsville, Alabama. Married for 40 years with seven children and nine grandchildren.
View all posts by familyencouragement →
This entry was posted in Family Issues and tagged children, family, godly values, home, legacy. Bookmark the permalink.