Be Grateful for Your Legacy

Posted on September 7, 2012 by familyencouragement

We rarely get any measurable snow in Alabama.   But when it does it almost shuts the city down.    My friends that live in the northeastern part of the country laugh at the panic even a couple of inches brings.    Because of the scarcity of snow storms we don’t have adequate equipment to deal with them – nor do we have experience in driving on the white stuff.

But I love it when the snow falls and covers everything for several days.   The sheer beauty of it is incomparable.   We spend more time together as a family by necessity and laugh and play more than usual.    Another reason I like the snow is because of something that happened in the front yard that left a sweet memory.   It reminds me to be grateful for the legacy God has given to me. 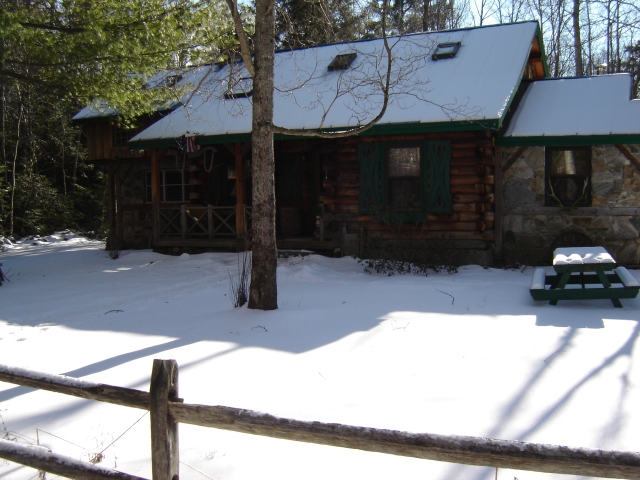 A special place in New Hampshire where my soul was often refreshed.

One winter we did have a major snowstorm (I believe it was in March of 1993).    My father put snow chains on the truck tires and was going to the store and had called me and asked me if we needed anything.   He dropped by our house and we went to the grocery store and also took along my two oldest sons, who were nine and seven years of age.

When we returned to our home my father (as he often did) wanted to come in and visit for a while.   As he walked up to the house my two boys, his grandsons, walked beside him.   I followed and  noticed something in the snow and lagged behind them.

Perhaps it was because I have always been sentimental, but it spoke deeply to me.   There in the snow were the big footprints of my father and the small footprints of my sons as they walked beside him.   I told Dad to go on inside with the boys and I would be there in a moment.

I just stood there and paused and focused on those sets of footprints, all belonging to people very, very precious to me.   I came alongside of where they had walked and placed my own footprint beside theirs.

My heart was so full.  I thought about how quickly life was passing by.   I thought about what a privilege it was to do something as mundane as going to the grocery store with my father and my sons.   I remembered when we had a major snowstorm in 1963 (almost eighteen inches) and my parents dressed me warmly and as a five year old I could hardly move it was so deep.

For me, it was a holy moment.   I asked the Lord to help me to be a godly dad and to have the same kind of influence on my children that my Mom and Dad had on me.

Fast forward fifteen years.   It was early on a Sunday afternoon, July 13, 2008.    In a couple of hours my family and I would go to the funeral home to view the resting body of my father who had passed away on the Friday before after a long illness.   My family was upstairs eating lunch and I didn’t have an appetite and had found a place to be alone in my thoughts about my dear father.    He had been so good to us and had modeled a faithful walk with the Lord.

I asked my mother if she minded if I went an hour earlier than the family to the funeral home.   She agreed and so I went on ahead of everyone.   The funeral home director gave me a bar stool of sorts and I pulled it up in front of the coffin of my dad and sat down and reminisced.    I thought about him as a person, the memories we had together, the profound impact he had on my life and I thanked the Lord for giving me a godly father.

My dad was not raised in church and was not saved until a few weeks after I was born.   He began to grow spiritually and taught us to love and serve God, first, by his own example, and also by his instruction.   Oh, for sure, we had conflicts and issues like every family because of sin, but his life and his heart gave me a hunger to know the God that he knew.

How can you say “thank you” adequately for that type of influence?     The truth is, it cannot be done in a commensurate way.   But we ought to try our best.

As I sat there I looked at his hands that had provided for me, held me when I was afraid, patted me on the back as I wept outside the dugout when I struck out to end a game, disciplined me when I had done wrong, and hugged me before I went to bed.   I noted his face – his mouth that had taught me, encouraged me, and corrected me; his eyes that watched me in scores of practices and games from all types of sports and that wept when I had done wrong.   Though I was only there for an hour before my family joined me, it was an hour of gratitude and joy mixed with sorrow and pain.

I was so glad that the night before he went to Heaven I came and sat by his hospital bed for three hours and talked about small things (I talked and he affirmed things with a nod as he couldn’t talk well because of a stroke).    I knew he wouldn’t live long because of his health, but I didn’t know he would be gone the next morning.

I finally stood up needing to go home and leaned over and kissed him on his head and rubbed his head and told him, “Dad, you’re the best Dad in the world and I thank the Lord for you.   I’ve gotta go home.   I’ll see you tomorrow.   I love you”.   He nodded and that was our last “conversation”.

Ashley telling my parents goodbye just before she left for her first year of college in Jacksonville, Florida.

May I encourage you to take some time to communicate to your parents, grandparents, or other family members that have established godly “tracks” for you to run on.    Harriet Beecher Stowe wrote, “The bitterest tears shed over graves are for words left unsaid and deeds left undone”.    May we do our best to remember those that have poured their lives into us, even at great sacrifice to themselves.

Pastor of Friendship Baptist Church in Huntsville, Alabama. Married for 41 years with seven children and nine grandchildren.
View all posts by familyencouragement →
This entry was posted in Family Issues and tagged family, gratitude, home, legacy. Bookmark the permalink.