Posted on October 12, 2012 by familyencouragement

I’ve been writing about what families can do to be close.  Some seem to think that that those that enjoy good relationships in their homes just happened to be lucky.   I believe it is the blessing of God from following His ways.

Closeness in a family (or any relationship) is a sum of specific ingredients.  It isn’t an accident, but the result of intentional actions.   One of them is practicing the “one another” commands as found in the Bible.   I have been focusing on “serving one another” (Galatians 5:13) and what that looks like in practical ways.

If your family took a poll and rated each person according to their servant’s attitude, how would the result look for you?    As you relate in your home, are you a giver or a taker?   I want to have the reputation of being a servant to Paula, my children and their spouses, my grandchildren, my Mom, my brother and sister, and my nieces and nephews.

I see this reality in the life of a lady named Phebe in the Bible whom Paul named as “a servant of the church” (Romans 16:1).     This was her reputation among her church family!   Could the same be said by those closest to us, our family- “(Insert your name) , a servant in our family”.

For most of my life both Mom and Dad worked to provide for us.   When I was a young boy I walked to my grandmother’s house after school (yes, we actually did that back in the 60’s!) until Mom was off from work.  (This was my mother’s Mom and her grandchildren affectionately called her Nan).

My grandmother was one of the most important influences in my life as a child.    She was a good listener, very giving, patient, and even-tempered.   Because of my parent’s busy schedules early in my life I spent a lot of time at her home and she had a profound influence on my life.

In the spring of 1976 just before I graduated from high school we discovered that my grandmother had cancer.    It was devastating to our family.   At the time she was 54 years old, the same age I am now.

I had moved away to Virginia to serve in a church at the end of 1980, my sister was attending college out of state, my brother was in high school, and my Dad was traveling frequently driving with his bus business.    So, in addition to her own job as a high school secretary Mom was helping Nan with her needs as the cancer began to take it’s toll on her.

The years passed by and every time I came home for Christmas and in the summer I knew my time with her was passing quickly.  I loved my Nan so much; she was one of the best people I have ever known.

Late on a Friday night in early July, 1982, six years after finding the cancer, my mother called and told me that if I wanted to see my grandmother alive I needed to come home as soon as possible.   Paula and I left around 10 p.m. from Alexandria, Virginia and made the fourteen hour trip to Huntsville hoping to get there in time to say our goodbyes.

We arrived the next day in the late morning and for four days we had sweet fellowship, reminisced and laughed about special times.   Each night family members took turns sitting up with her knowing that her life on earth was soon to end.

It was my turn on Tuesday evening and I sat by her bed and occasionally she would awaken and we had conversations that I will treasure for the rest of my life.   By the morning she had slipped into a coma and it was evident that the end was near.

Around 3:15 p.m. all of us were gathered around her bed watching her draw her last breaths.    I was at her left side closest to her face and my Mom was at the foot of the bed softly weeping holding and rubbing her mother’s feet.

I turned to my mother and asked, “Mom, do you want to come and be by her side?”   She said, “No, I want to be her by her feet because this is what I always wanted to do – be her servant and wait on her”.

At 3:45 p.m. on July 7, 1982 at the age of 60 my sweet grandmother went to Heaven.   At the same time, though her heart was breaking, my mother held to her feet very grateful that she had served her mother.

Serving our loved ones will not only make us closer, but will also leave us with fewer regrets. 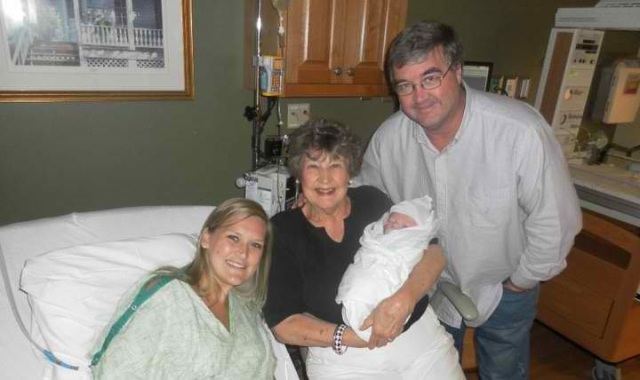 Four generations. My mother, Linda, Ashley, baby Brody, and myself.

Pastor of Friendship Baptist Church in Huntsville, Alabama. Married for 41 years with seven children and nine grandchildren.
View all posts by familyencouragement →
This entry was posted in Family Issues and tagged home, regrets, service. Bookmark the permalink.