Things I Learned from My Dad – Standing Alone

Posted on October 17, 2012 by familyencouragement

One of the most crucial things a father can do for his children is to instill biblical convictions in their hearts.    These are the pillars on which we make decisions and serve as guideposts for our lives.

John Maxwell wrote, “A conviction is not just an idea that you possess; it is an idea that possesses you”.   At the root of our convictions should be the Bible and the benefit of these beliefs is that they give us courage to stand, even when it is difficult.    A great preacher, Dr. Jack Hudson said, “Courage comes from conviction and our convictions come from the Word of God”.

Whenever a person has a conviction about an issue it will mean that sometimes they will have to stand alone.   As believers we do not live by what the majority opinion is, but by what God’s opinion is.    The great American patriot, William Penn, said, “Right is right if no one if for it and wrong is wrong if everyone is for it”.

Standing alone is not easy.   It means that you are recognized as being the “odd ball” and usually results in being alone, misunderstood, and even being mocked.    Merely having a strong belief is not a conviction.   It must be consistently practiced and seen in your life.

Only having a purpose worth laying your life down for will enable one to stand alone.  This is clearly seen in the life of Daniel, a teenager living in a foreign country away from his parents, who was asked to compromise God’s standards for his life.

The Bible records his standing alone – “But Daniel purposed in his heart that he would not defile himself with the portion of the king’s meat, nor with the wine which he drank: therefore he requested of the prince of the eunuchs that he might not defile himself”.   (Daniel 1:8)

Notice in the above reference that Daniel had “purposed in his heart”.    The word “purposed” is past tense.    It means to make a determination or a commitment.   There had been a time in his life when he had purposed, determined and committed to obey God’s laws for His people.   This lifestyle was a mark that distinguished them from other people.

Though this passage doesn’t mention Daniel’s parents I believe it implies clearly that he had received training from them concerning God’s ways.    Parents are to be the conveyer of convictions in the lives of their children.   Sometimes that involves things we cannot do and other times it concerns matters that we must do.

My father was a man of conviction.   (My mother is, too!)     This doesn’t mean they were cantankerous, negative, or unpleasant to be around.    No, they were gracious and kind in every setting.

It just means that there were some boundaries for their lives (and those of their children) that were important enough to stand for, even if it meant having to stand alone.   I learned to stand alone, when necessary, not from the words of my dad, but from his life and how he lived.

When I was a young boy, about eleven years old, our family was enjoying a meal at Shoneys one evening.    Shortly after we had been seated and placed our order a group of six or seven sailors came and were seated at the table across from ours.

The guys all looked sharp, dressed in their whites, and they were all young, in their twenties.    We were served our food and gradually the young sailors began to be loud and boisterous.   That wasn’t the problem.    Not long after that the volume of their laughter and talking began to be punctuated with swearing and cursing.    I had heard cursing before at school, but some of their words were new to me!

We continued our meal and the conversation at the table beside continued to degenerate.   Suddenly, I saw my father stand up and walk slowly over to their table and say, “Fellows, I appreciate your service to our country and am glad you are sitting beside us, but I have a wife and daughter sitting over there with two young boys and I want to ask you not to use language like that in their presence”.     With that, he said, “Thank you”, and returned to our table and we finished our meal.    Those young men grew quiet and occasionnally  glanced over at our table (I was nervous!), but we never heard another foul word.

When we finished and were leaving.   Dad went over and told the guys, “I appreciate you helping me, fellows.   God bless you for what you are doing for our country”.

I was stunned by what had happened and, even though I was very young, I knew it took a lot of courage for my father to do what he did.   There were others in the restaurant and had heard the same things, but Dad “stood alone” and was gracious in doing so.   It made me think about what I stood for and doing what was right, even when it was difficult.

One more story.   From the time I was born I had always gone to the same barber.   It was the barber my father had gone to for many, many years and was great friends with this man.   One day my Dad came over to the house (I was married at the time and in my early 30’s) and informed me that we wouldn’t be going to this barber any more.

I was shocked.   This man was a friend and wondered what in the world had happened.   I asked, “Dad, what happened?”

“Son”, he said, “As I was paying for my haircut I noticed in the glass counter below that there were some baseball hats for sale.   Some of them had very wicked things written on them.   Just before I left I told him that we have been friends from a long way back and that we would always be friends, but if he wanted to sell those hats that I wouldn’t be able to come here for my hair cuts nor would my sons or grandsons”.

The next time Dad went there to get his haircut the hats were gone.    My sons and I continued to get our hair cut there until the barber moved away after many years of living in Huntsville.

Even though Dad had an uncomfortable conversation with his friend, they remained close until my father died.   My father loved people and was very loyal to his friends.    But he was more loyal to principle than to personality.    I could mention other stories where I saw Dad stand alone, but these will suffice. 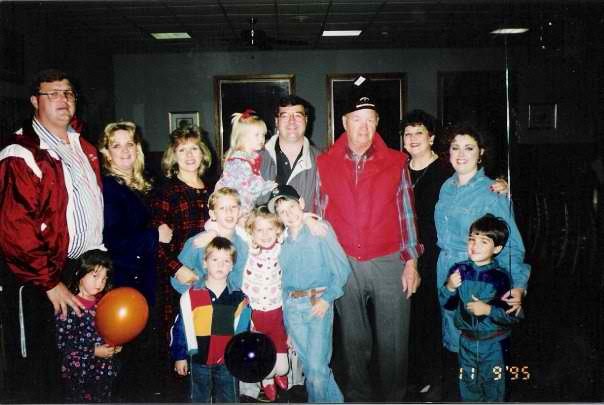 Dad’s 60’th birthday party with his kids and some of his grandchildren.

On a number of occasions I have had to stand alone for what was right and it has always been difficult to do.   I am so grateful that my father taught me through his life and example that truth isn’t just something you believe in your mind, but that it has a practical application to the way I should live.    May God allow me to have the same influence on my own children.    Thanks, Dad!

Pastor of Friendship Baptist Church in Huntsville, Alabama. Married for 41 years with seven children and nine grandchildren.
View all posts by familyencouragement →
This entry was posted in Family Issues and tagged convictions, father, home, standing alone. Bookmark the permalink.