Things I Learned from My Dad – Loving People

Posted on October 31, 2012 by familyencouragement

People are different in the way they show their love and concern for others, but it was very easy to see in Dad’s life.   No one could be around my father for very long and not sense that he cared for them.   It was obvious in his words and his actions.   Dad didn’t have a charismatic personality nor was he ever the life of the party, but he loved deeply and those whom he loved knew it without question.

He was very expressive in his love.   For example, in his words.  Though he was not verbose he was not hesitant to let you know that he loved you.    Probably the most frequent words he ever said to me, besides saying my name, were “I love you, son”.

Dad’s first stroke was in October of 2001 and he had several after that until he went to Heaven in July of 2008.   One of the ways a stroke is most debilitating is in a person’s speech.   Their mind knows exactly what they want to communicate, but their ability to say it doesn’t cooperate.   His ability to express himself gradually began to diminish.  Speech therapy didn’t help much.   It was tough for him – and for us.

At first he was extremely frustrated because he couldn’t communicate effectively with us, but soon he accepted this limitation and was able to say twenty or thirty words.   Even those were not said clearly and took great effort on his part.   A lot of times he just nodded or shook his head in response to questions.   Sometimes he would point to things to help us understand him better and we would try to guess and fill in the blanks.

Mom had to leave him at home occasionally for a couple of hours when she had to run some errands and when I would call the house he would answer.   He would tell me she was gone and I would ask him to tell her I had called and to call me back.   One of his words he could say was “OK”.   He would say that and then hang up suddenly without telling me goodbye.   Of course, I wasn’t bothered by it because it was the best he could do.

One day about a year before he died I had called for Mom and Dad informed me she wasn’t there.   I asked him to tell her to call me and he said, “OK”.   This time he didn’t hang up immediately and I said, “I love you, Dad”.   Clear as a bell he replied, “I love you, too, Rick”.    There was no handicap in his speech at all; it was as if his speech had never been affected.   After we hung up I cried because I loved to hear those affirming words from my Dad and I realized how very special they were then and had been for all of my life.

He was also physically expressive in his care for people.   He would stand by a friend and talk with them and put his hand on their shoulder as they spoke.    Sometimes when I was sitting on the couch by him he would put his arm around my shoulder or rest his hand on my knee.   That non-verbal act communicated to me that he cared deeply for me.   It gave me security when he did that when I was a young boy or teenager; but it meant more than words can communicate when I was in my 40’s and I knew I was still his boy and he loved me. 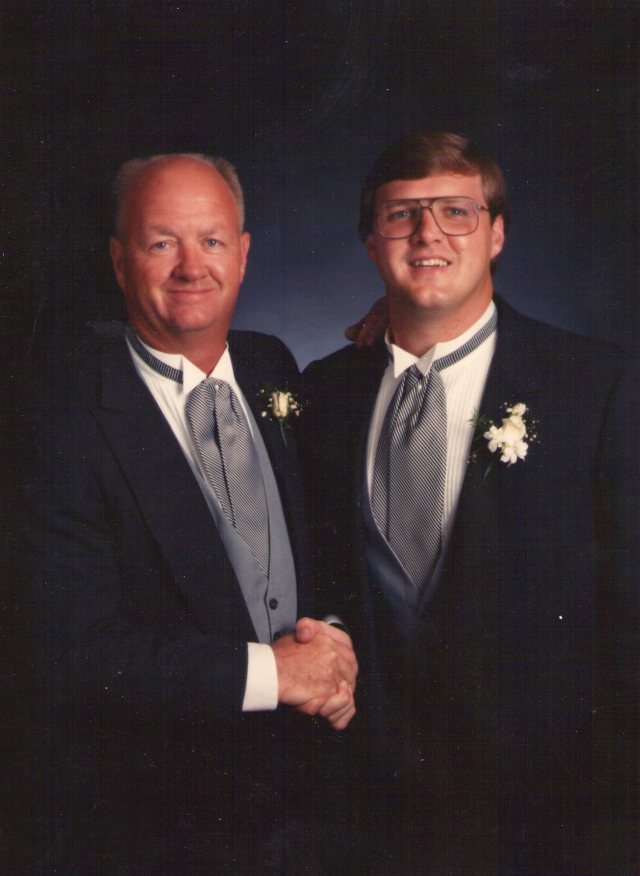 Dad with Hoss on the day of his wedding. I love this picture because
of the joy on both of their faces. These are my two best friends.

I remember when I stuck out to end a little league baseball game when I was twelve and felt I had lost the game for us.   After the game we had a brief team meeting and then dispersed.   I was able to hold my emotions in until everyone had left.    Then, all of the sense of failure came pouring out through a torrent of tears.

Dad put his big paw-like, calloused hands on my shoulder and tousled my hair, pulled me close to him and we walked to the car.   I felt secure with him and needed it very much at that moment.  To this day I still recall where this happened and occasionally go there and stand, thinking about Dad  and thanking the Lord for him.

I learned so much about parenting from him  – balancing firmness in discipline with loving my children with my words and hugs.   I think that one reason I wanted to have a large family was to love my kids the way that my Dad had loved me.  It was such a meaningful time in my life that I wanted to replicate it – but with more kids!

Dad saw the best in people.   He wasn’t cynical about life.   He was like a magnet to hurting people because of his heart and willingness to listen.     Someone wrote, “You make more friends with your ears than with your mouth”.    A lot of people have commented to me about my father’s wisdom and how he helped them.    I agree that he did indeed have wisdom, but I honestly believe that a lot of the help he gave to people was just being content to actively listen to their problems and love them.    Sometimes we just want to know that someone really cares about us.   Dad really cared about people.

My wife has a story about Dad and how his listening was a great comfort and encouragement to her.   Paula’s mother had been diagnosed with cancer and her life was close to it’s end.  One day her brother called and told Paula their mother probably only had days to live.   Her parents were in Dayton, Tennessee and this was almost a three hour drive from Huntsville in those days.

Paula and I talked about the situation and I knew we needed to go as soon as possible.   I was the only pastor on staff at our church at the time and the next day was Sunday and no one was prepared to speak but myself.   My father heard us discussing it and he volunteered to drive Paula to Dayton himself on Sunday and I could go there on Monday, the next day, and join her.

My wife did not have a close relationship with her father.   He wasn’t verbally abusive as much as he was just neglectful of expressing any love.   She only heard her father tell her that he loved her a few times and usually they were when he had too much to drink.   So, while she was very grateful and loyal to her father, she knew my Dad loved her because of his words of affirmation and kind actions the years she had been in our family.

Paula later told me that on the trip to Dayton to see her Mom that my Dad was so comforting and encouraging to her.   He asked her questions and listened.   He told her that “everything will be alright” (one of his most common lines to hurting people) and treated her like his own daughter.    She told me, “Your Dad cared about me and I knew it, not only because he sacrificed to drive me to see my mother, but in the compassionate way he spoke with me on the trip”.

I was grateful for Dad helping me out with a difficult situation, but even more for his kindness and graciousness to minister to Paula with his words and wisdom.    I believe God ordained that my father would drive my wife for that short trip so that it might prepare her and give her strength for her mother’s death just a few days later.

During my senior year of high school one of my dearest friends had a minor car crash.   He wasn’t injured, but the car sustained enough damage that it was going to have to be taken to a body shop for repair.   It was still able to be driven after the accident and he came right over to our house.

On the verge of tears he shared with Dad his fear of going home and telling his father about the wreck because of the anger that would be directed to him.   Years later as we were rehearsing this story he told me something I had forgotten after he came to our house that night.

“Rick”, he said, “Do you remember what your Dad told me when I was worried about going home with the car and facing my Dad?”    I didn’t remember.   My friend continued, “Your Dad asked me if we had insurance on the car and I told him we did.    He calmly said, ‘Oh, son, don’t worry about it then, that’s what insurance is for’”.   My friend never forgot the simplicity of those words and the spirit behind them.   They were words of encouragement and love.

I had a lot of friends that looked to my Dad as a father figure though their fathers were living.   They didn’t love their father less and my Dad more, but they enjoyed being with him because it was so obvious that he loved them.

As I have gotten older I have realized that I have never had a problem with a lack of security in my Heavenly Father.   I have always known He loved me unconditionally and that my acceptance was not based on my performance, but His love and grace.   I believe I received this precious gift from my own Father as he pictured the love of my Heavenly Father.   It has taken away the need to prove myself worthy of God’s love and to enjoy His heart of mercy.    Dad modeled this for me and I am so grateful.   It has made a difference in my life as I have related to God.

It’s interesting: I weep easy; sometimes I wish I didn’t, but I do.   When I care about people I want them to know it and I express it verbally without hesitation.   When I see my friends and family I physically express my love with bear hugs and pats on the back.   Even now, when I’m sitting by my sons and daughters I love to put my arms around them and hold them close to me.

My father did all of these things.   I learned this from my Dad as I watched him love others and, best of all, love me, too, in the same ways.    I am a better husband, father and friend by watching my Dad love us and his friends.

Dad loved deeply and expressed it freely.   I am so glad he did.   His life reminded me of Jesus and he taught me how to love people.    Thanks, Dad.   I love you very much and look forward to seeing you again soon.

Dad’s high school graduation picture from Butler High School in 1955.
He was a terrific athlete and a great friend to his friends. I thank the
Lord for his influence on my life.

Pastor of Friendship Baptist Church in Huntsville, Alabama. Married for 41 years with seven children and nine grandchildren.
View all posts by familyencouragement →
This entry was posted in Family Issues and tagged family, father, home, love, relationships. Bookmark the permalink.