Posted on January 2, 2013 by familyencouragement

Today my precious granddaughter was over at our house and didn’t like it when her mother had denied her something she wanted.   So she took a swat at her leg.   My daughter disciplined her.

I didn’t know this had happened until I saw them together a few minutes later and I noticed my granddaughter was especially quiet.   My daughter told me what had happened and I asked my little granddaughter, “Did you tell your mother you were sorry?”

She stubbornly refused to do so until her mother informed her that another spanking was on the way.   Finally, she did so, but it was not easy.   Here is the difficult part of the story: my little granddaughter is just over three years old.     The pride of defensiveness is already present in her life.    All of us are cut from the same cloth and have the identical tendencies in our hearts.

No one likes to admit when they are wrong; a proud man absolutely refuses to do so.   The three most difficult words for a proud person to say are “I was wrong”.    Even when we know we are wrong, we don’t want to own up to it.

When a person is slow to admit to wrong there is one alternative, to blame others.   And when we blame others we become defensive.  We want to protect our ego and look better than we really are.

Remember when Adam and Eve sinned?    Rather than confessing and admitting their wrong-doing to God they began to shift the blame on each other.

Adam blamed Eve and indirectly blamed God because He had given her to him.   Eve blamed the serpent.   One of the first manifestations of sin in the universe was a defensive (vs. transparent) spirit and a refusal to admit to personal sin.   This same inclination is in all of us.

My granddaughter was simply responding the way her parents did when they were her age.   And my daughter was that way because she got it from me.   There is a link to each of us that goes all the way back to our first parents, Adam and Eve.    The gene to blame-shifting is in all of us. 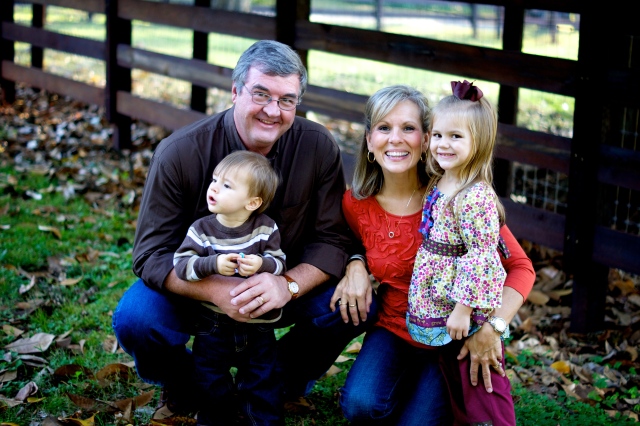 Our dear grandchildren, Brody and Brighton.

I read of a survey taken years ago from teenagers that were asked what was the number one complaint they had of their father.   The number one response was overwhelming, “My father will not admit when he is wrong”.

When I first heard that it hit me hard.   I didn’t even have children yet, but I knew it was true because it was difficult for me do so as a married man.   I didn’t want my children to have to say the same of their father one day.

Someone wrote, “When a person is always right, there is something wrong”.   When was the last time you apologized to your family?  This is an indicator that speaks to your pride or your humility.   It’s a lot easier to say, “I’m sorry” than it is “I was wrong”.

My friend, Harold Vaughan, says there are nine words we must learn to say sincerely and often if we are to have close relationships – “I am sorry; I was wrong; please forgive me”.    Again, when was the last time you said these words?   A proud person will not say them, but be able to defend his actions in his own mind.

A person that is defensive always wants to be right.   He lacks vulnerability and transparency.   One of the lessons I have learned as I have grown spiritually is that I don’t always have to be right.   (It sounds silly to even write this because no one is correct on every issue all the time, so why pretend to be?).

One day I drove by a church sign and read this simple, but profound statement, “In youth we learn, but in age we understand”.   There is a difference.   Young people have a lot of facts, but they lack a context of experience to have wisdom.   Those that are wise understand they don’t have to be right every time.

It’s a dangerous sign when we have to be right all the time.   We are on thin ice. Someone quipped, “The less a person knows, the more certain he is that he is right”.

Charles Swindoll tells a humorous story about how silly we are when we refuse to admit when we are wrong.   Here’s the story.

A guy named Zeke Pike who lived in Muleshoe, Texas would not admit when he was wrong, no matter what!    One day Uncle Zeke was walking along the street and he happened to shuffle into the blacksmith shop, sawdust all over the floor.   What he didn’t know was just before he got there, the blacksmith had been working with an uncooperative horseshoe and beat on it till it was black.  It was still hot, but wouldn’t bend, so he tossed it over in the sawdust.

Zeke walked in, looked down, and saw that black horseshoe.   He picked it up, not knowing it was still hot.   Naturally he dropped it very fast.   The old blacksmith looked over his glasses and said, “Kinda hot, ain’t it Zeke?”   You know what Zeke said? “Nope, just doesn’t take me long to look at a horseshoe”.

The Bible tells us to acknowledge our sin (Psalm 32:5) and to confess our faults to one another (James 5:16).     One of the characteristics of a Pharisee is that he refuses to do either, but compares himself favorably to other people (Luke 18:11).   He will not acknowledge or confess his sin to God or to others he has hurt.

A man who had greatly influenced me through his books had a moral failure in his life.  He was unfaithful to his wife.   For several years he disappeared.   He wrote no books or spoke, but worked on his inner life and his marriage.   Years later he wrote a book on dealing with personal brokenness and failure that I have used in helping to restore others to a close relationship with God.

He wrote that one of the keys to his being able to restore his heart to God was that he would never defend his sin.   He put it simply this way, “No defense”.    In other words, he would not have a defensive spirit, but an open and transparent spirit.  I can testify that he is truly characterized by a quiet humility.

Pride causes us to refuse to confess or admit what we have done.  We are afraid we will lose face and others will pull away from us.  The irony is that we deeply respect the person that is honest about his failures and sins.   Even in the political realm the maxim is used, “It isn’t the wrongdoing that gets you, it’s the cover up”.

The Bible agrees with this, “…before honor is humility”.   (Proverbs 18:12)    I suppose the flipside is true, “Before dishonor is pride”.

Now, I have five adult children and two in middle school and high school.   I wonder how they would answer the survey question, “What is the number one complaint I have about my father?”    What would your children say?

Someone wrote, “Temper is what gets us into trouble; pride is what keeps us there”.

(I would recommend a book to you that has helped me in this area.   It is called “The Calvary Road” by Roy Hession.   I hope you will get it and read it.   It will challenge you deeply and help you.    Amazon.com carries it at a great price).

Pastor of Friendship Baptist Church in Huntsville, Alabama. Married for 40 years with seven children and nine grandchildren.
View all posts by familyencouragement →
This entry was posted in Pride, Speech and tagged family, home, pride, speech. Bookmark the permalink.