Posted on January 8, 2013 by familyencouragement

Sometimes Paula and I are with a couple and they will disagree over an issue and it gradually degenerates into an argument.    I know that we are always uncomfortable when this happens.   When I was a child and my parents would disagree strongly over something I wanted to get away.    I know that sometimes crucial matters must be faced and addressed, but we can do so without an argumentive spirit.

What is it that makes us so desperate to be right even to the point of a heated argument?   It is pride.   That doesn’t mean that we aren’t to stand for truth or to compromise on important areas.   However, when I have a tendency to consistently dispute with others something is very wrong.

Paula and I have had plenty of disagreements, but I don’t want to be arrogant, dogmatic, and argumentive during these times.  I have always tried to not disagree with Paula ever in front of the kids.   It gives them the opportunity to manipulate one of us against the other when they want something, but there is something worse.

This not only breaks the fellowship between us, but gives our children bad memories of our home and creates insecurity in their tender hearts.   They wonder about our commitment to one another.    They wonder if we might divorce one day.    Our children are growing up in a culture where divorce is rampant.   I’m sure that every child has a friend that is raised in a single-parent family because of divorce.

One day I was thinking about how my children perceived us as parents and if they ever wondered about the permanency of our marriage.   I didn’t want them to have that fear and so when I was alone when each of the kids running errands I would tell them that Paula and I were never going to leave each other or them.

In no way was I bashing their friends in single homes or our friends that had gone through a divorce.   My heart was to simply remove any fear they might have of that.    I believe it is a question in the back of their minds.

How would they have felt if I had said that to them and then they heard Paula and me fighting and arguing?   Our example would destroy anything else I had said to the contrary. 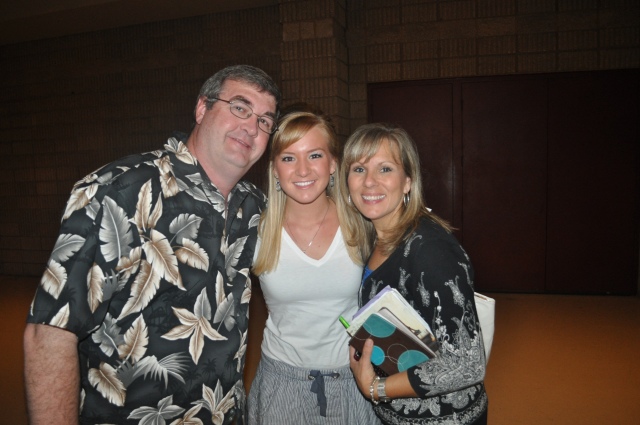 Paula, April and myself at Youth Conference in Gatlinburg, Tennessee.

Pride makes us defensive and when we want to protect our ego we argue to prove our point.   And the consequence is that we begin to grow apart.    All because of pride, but cloaked by our arguing.

Pride and division are associated in the Bible.   The Bible speaks of the “…pride of man…strife of tongues….strifes of words”. (Psalm 31:20; I Timothy 6:4)

At the root of division, anger, and arguments is pride.    This is one of the reasons God established a standard that a spiritual leader was not to be proud.   He would be one that argues and tears down rather than to edify and build.

Though parents are not pastors they are spiritual leaders and have more influence over their children than any pastor.     Note a couple of warnings for spiritual leaders concerning their attitude in dealing with other people.

“And the servant of the Lord must not strive; but be gentle unto all men, apt to teach, patient”.   (II Timothy 2:24)    The word “gentle” has the idea of being mild (versus quick to react).   The word “strive” means “to fight”.   It has the idea of armed combatants in a struggle.   In this case it isn’t a physical war, but a war of words that dispute and quarrel.

Simply put, this type of leader is not only ineffective, but brings great harm to those under their leadership.     Are you known as an argumentive person?   Is it important to you to win on every point?   Do your children hear you verbally war with your spouse?

Perhaps you were raised in a home that was filled with arguments and division.    If so, remember that we learn to parent from our parents, even in the bad areas.   Be alert to this tendency.

“Better is a dry morsel, and quietness therewith, than an house full of sacrifices with strife”.   (Proverbs 17:1)    A tranquil home that has little materially is to be preferred over one that is filled with arguments, even if the family has plenty.

“It is better to dwell in the wilderness, than with a contentious and an angry woman”.   (Proverbs 21:19)   I don’t think it would violate the text to substitute the word “mother” for “woman”.    Angry, disputing mothers that argue with their spouse or children make them want to run away.

One person can affect the morale of an entire group.   The Bible counsels to “Cast out the scorner, and contention shall go out; yea, strife and reproach shall cease”.   (Proverbs 22:10)     I have seen this when I was coaching a team before.   One player brought so much division because of his rebellion and argumentive spirit that when he left the team the divisiveness was gone.    One that argues will affect a family, too!

I know of a situation where a man argued frequently with his family and his friends.   He died unexpectedly and peace came into that home.    His spirit of pride was devastating to his family.

“Where no wood is, there the fire goeth out: so where there is no talebearer, the strife ceaseth.   As coals are to burning coals, and wood to fire; so is a contentious man to kindle strife”.   (Proverbs 26:20-21)     Many times the “wood” and “coal” that feed that fire is a person that loves to debate and argue.   When the wood and coal are absent, so is the fire.

One day when my children and wife stand by my casket and look at my body I don’t want them to think, “He sure did like to argue….I won’t miss his temper….He wouldn’t back down when he was wrong”.     None of us are perfect, but we can be real.    We can learn to be quiet when we want to show that we were right.   We can focus on looking for places where we agree and start there.

Someone wrote, “It’s possible to continue a relationship without reaching a resolution.   We don’t have to be twins to be brothers”.

I have listed a number of Scriptures in this post.   Why not select one and write it on a 3×5 card and memorize it and let God speak to you about the need to die to your pride.   When that happens so will your desire to argue with your family also go away.

Pastor of Friendship Baptist Church in Huntsville, Alabama. Married for 40 years with seven children and nine grandchildren.
View all posts by familyencouragement →
This entry was posted in Pride, Speech, Uncategorized and tagged arguing, family, home, pride, speech. Bookmark the permalink.