Posted on March 16, 2013 by familyencouragement

This is without question the most important truth I ever learned from my Mom.   I had heard my pastor and many other preachers say the same thing, but it didn’t hit it’s mark in my heart until Mom said it.

There was never a time when I was not in church on a regular basis.   From the time I was born my parents took me to the services of our church not only on Sunday morning and evenings, but on Wednesday evenings and at other special meetings.

I wrongly assumed that I was a Christian because of the fact that my parents were Christians and that we attended church regularly.   (Dad and Mom were involved deeply in serving the Lord, too, in our church).     Someone wisely stated, “God only has children, He doesn’t have grandchildren”.    In other words, I was not a Christian just because my parents were.

I honestly thought that I was going to Heaven on my parents coattails based on their faithfulness.    The Bible teaches that salvation is not not something achieved by my own efforts or merits, but Someone (the Person of Jesus Christ) I receive by faith because of what He did on my behalf.

There are many Scriptures that teach this, but here is just one – “For by grace are ye saved through faith; and that not of yourselves: it is the gift of God:  Not of works, lest any man should boast.”   (Ephesians 2:8-9)

Though I had grown up in church I didn’t understand this truth.   I thought I could earn salvation and that being a Christian was like making regular payments on a debt with the payment being trying to do my best.   I didn’t see myself as one that had broken God’s law in His Word.

In our church we had the Lord’s Supper every three months and I was fascinated by the service.   First the broken bread was passed around the auditorium on many small plates.    People would take a small piece and then wait for the pastor’s direction to partake of it.   After that grape juice in small cups was passed around and the same process was followed.

I didn’t comprehend it then, but now I understand the purpose of this focused time.  It is to (1) remember the sacrifice and the price Jesus paid for our salvation and (2) to keep our hearts pure and clean before the Lord.    The bread and juice are symbols to remind us of deeper realities.    The broken bread pictured the broken body of Jesus Christ after being scourged and beaten and crucified in my place.    The juice was a picture of His blood which was freely given as the payment for our sins.

It was always a sober service, very quiet and reflective.   It’s purpose wasn’t to bring forgiveness, but to remind us of the awful price of Calvary, the only way anyone can ever go to Heaven.

I had seen this happen many times in a service, but I had never participated.   All that changed on Sunday night, February 11, 1968.   I was sitting by my Mom and Dad was on the other side of her.   That evening I purposed that I was going to do what I had seen my parents and all those around me do through the years.

Excitedly I saw the plate coming down our row with the small tray of broken bread.   Dad took a small portion as did Mom and then she reached across me to pass it down the row to the next person.   Quickly I lifted my hand to grab some of the bread and Mom firmly placed her hand on the top of my little arm and pushed it down away from the plate.   I watched as it went down the row and thought, “Well, there it goes, no Lord’s Supper for me tonight”.

I nudged Mom and she leaned over and I whispered in her ear and pointed to the now distant plate of bread and said, “I want to do that”.   She said something that forever changed my life, “Rick, you can’t because you are not a Christian”.

My soul felt like a sledgehammer had hit it dead center.   I sat there stunned.   You see, I thought that I already was a Christian because my parents were good Christians.   It had never occurred to me that I was lost.   I didn’t remember anything else about the service, but I knew one thing, I had been confronted with my need of a Savior.

As soon as we got home I told my parents that I wanted to become a Christian.   It wasn’t because I wanted to be able to take the Lord’s Supper, but because for the first time I realized I needed to be saved, forgiven of my sins.   I wanted to go to Heaven with them and Christ, and not go to hell.

The next Sunday on February 18, 1968, just a few months shy of my 10th birthday, at the end of our morning service during the response time to the message I stepped out and walked to the front of the auditorium.    A man named Roy was there receiving those that responded and I asked for one of my Dad’s best friends named Wayne to help me.

We sat on the front row and he opened his Bible and showed me verses that I was a sinner and that because of God’s holiness He had to punish sin.   He showed me that God also loved me and died on the cross in my place and took God’s wrath upon Him so that I might go to Heaven.   Then he showed me that all I had to do was to rest upon what Christ had done for me and by faith cry out for mercy and forgiveness.

I did so that memorable morning and I became a child of God through my faith in Christ.   As a nine year old boy about the worst thing I remember doing was cursing.   I had never heard my parents curse or swear, but I heard my friends at school do so and I learned curse words and said them.

I’m sure I had sinned in others ways – selfishness, deception, stealing, and other areas. It’s a part of our nature when we were born, a propensity to do wrong.

The next day when I went to school I didn’t curse anymore and never did after that.   Now, it wasn’t the fact that I stopped doing something that made me a Christian.   Someone wisely said, “You don’t get better to get saved, you get saved to get better”.   Good people don’t go to Heaven; saved people go to Heaven.

On that special Sunday morning in my life, over forty-five years ago, my life was changed eternally.   Not only did I receive a personal reservation for Heaven and a quantity of life, but I also received a quality of life.   Someone said, “If there were no Heaven or hell, I would still rather be a Christian”.   Of course, there is a Heaven to gain and hell to shun, but I agree with the statement.    God has given me joy, peace, and love for people, great friends.   I have been so blessed. 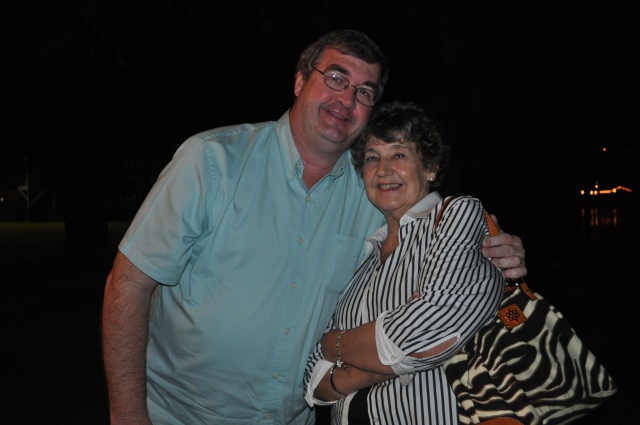 Mom and me at “Top of the River” Restaurant in Guntersville in the summer of 2011.

No, I haven’t always lived a life that has pleased the Lord and have regrets.   In spite of my falls, I know that Christ has forgiven me, lives in my heart and helps me with His strength to not only do what is right, but He also gives me the desire.

Though my parents didn’t grow up in church I am so glad that they became genuine Christians and gave Hoss, Melanie and me the privilege to grow up in a godly home.   I’m grateful Mom was blunt with me about the truth that I needed to be saved on my own and didn’t muddy the message of the simplicity of the new birth.

I have a hope and expectation that I’ll see my Dad again, other loved ones and friends, and my Savior because of that most important day of my life – February 18, 1968.   I hope that you, too, have a spiritual birthday.    As Jesus said,” Ye must be born again” (John 3:3).

Paula and I have seven children and I am passing on the truths to them that my parents passed on to me.   Melanie and Hoss are doing the same with their kids.   My life could have turned out entirely different had I not been faced with the truth Mom gave to me that night.   Though I was young, it made sense.

Mom, I love you for not only trying to raise me right, but for helping to introduce me to the dearest Friend I’ll ever have, the Lord Jesus.