The Importance of Patience

Posted on April 29, 2013 by familyencouragement

If we knew how important patience is we would be much more proactive in confronting impatience in our lives.   When we are impatient we are unloving (I Corinthians 13:4).   There are two motivating reasons why patience is important.

First, it is important in our relationships.    The Bible teaches that we are to “…be patient toward all men.”    (I Thessalonians 5:14)    The fact that it is a command means that our patience will  be tested with people.   Those with whom we are the most impatient are those whom we have the most difficult time loving.

A key to maintaining unity in a relationship is that we have “…longsuffering, forbearing one another in love….”    (Ephesians 4:2)     The word “forbearing” means “to endure an unpleasant situation”.   It has the idea of tolerating that which is difficult.   When I am impatient I want to change something or someone when God has allowed that situation or person to come into my life because He wants to change me.   He wants me to become like Him, patient.

Once I was at the mall with two of my children and they were very young.   Of course, I had a goal and a set time to get everything done, but it was an adventure to them.   While holding hands with each of them, one on each side, they began to tease one another and play.   It made it difficult for me to walk with them as they bounced back and forth.

I told them to settle down and they didn’t.   The fun only increased for them while my frustration grew.   Finally, I stopped and bent over and looked them in their faces and said very sternly, “Stop acting like kids”.

Immediately the Spirit of God spoke to me about my impatience and anger and even the folly of what I had just said.   They were kids!    Actually, what I was saying was, “You are interfering with my schedule and time frame to get things done”.

It’s no fun having an impatient father or mother (or a spouse).   They get angry quickly and say hurtful things.   I had crushed their spirit when they weren’t doing anything wrong, but playing and acting like children do when they are in a new place.   I sought their forgiveness, but more than that, as I continued my trek through the mall I had a conversation with the Lord about my impatience and asked Him to help me.

A second area in which patience is important is in our leadership.   God places a major emphasis on the importance of patience in the life of a spiritual leader.    I believe the same principle transfers to anyone in a position of influence and responsibility.

Pastors are told to “preach…with all longsuffering…” (II Timothy 4:2).    Preachers not only need good content when they speak, but they need good character, too.   The goal of preaching is to lift up Christ in order to see lives changed.

However, the preacher isn’t responsible for the response of the people.  Sometimes they will react negatively and reject the truth.  (Jesus was crucified for telling the truth).  Growth and change is a slow process and doesn’t happen overnight.    This requires patience from the pastor as he ministers.

A pastor is said to not be a “striker” (I Timothy 3:2-3; Titus 1:7).   The word means “quarrelsome or quick-tempered”.   Leaders must practice restraint when they are opposed and their message is rejected.

The Apostle Paul ministered “in much patience”  and with “love unfeigned” (II Corinthians 6:4, 6).   The two, patience and love, go together.     The two qualities, love and patience, are joined as being characteristic of Paul’s life and ministry – “…thou hast fully known my doctrine, manner of life, purpose, faith, longsuffering, charity, patience…”  (II Timothy 3:10).   It was one of the keys to his effectiveness.

When a leader isn’t patient and gentle people will not receive his message (II Timothy 2:24).    Worse, it influences those under his leadership to also become impatient, demanding, and  unloving.    Parents and leaders, we don’t reproduce what we want, we reproduce what we are.

Patience is important in our relationships and in our leadership.    It is easy to talk about love, but tough to practice it and the first quality God uses to measure love is “longsuffering” (I Corinthians 13:4).

When my daughter, Ashley, went to college I received a call from her a number of months after she had begun school.    She told me about a young man that she had met and enjoyed his company.   We talked for a long while and I could tell she was interested in him and that he was in her. 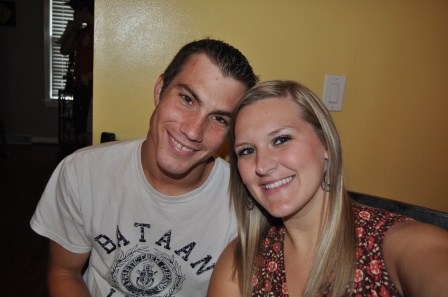 His name was Bryan and he was two years ahead of Ashley in school and they had met each other while traveling together to play basketball.   Ash had made the girl’s team and was playing and Bryan had been on the guys’ team for several years.   We only got to see Ashley play twice, once in Birmingham, Alabama and once in Nashville, Tennessee.    So, the first time I had ever met Bryan was in Nashville.

The Bible has a warning against close relationships with angry (impatient) people – “Make no friendship with an angry man; and with a furious man thou shalt not go: Lest thou learn his ways, and get a snare to thy soul.”   (Proverbs 22:24-25)   In other words, we are influenced by those we spend time with.    I have seen angry adults and then met their parents and usually the father was impatient just like his adult son.

Bryan did play hard and with great effort.   In fact, he never slowed down or took a play off.   There were lots of opportunities for him to get angry as he played underneath the basket and was shoved, fouled and elbowed.   But he never reacted outwardly.

That was an important night for me.   I knew he would be a good leader to Ashley and to his children one day.  Ash and Bryan did get married about 2 ½ years later and he has been a good leader to his family.    I thank the Lord for his life and consider him as one of my own sons.

I’ll write more about this in later posts.    May you allow God’s Spirit to control you and allow Him to love others through you today.