Posted on May 7, 2013 by familyencouragement

Several months ago a professor from my college days passed away.   I never had him for class, but everyone knew him around campus for his smile.   He always had a joyful, cheerful countenance that radiated.   His name was Tommy Troxel and he taught speech and communication classes.

Ten years ago I learned something new about this dear man that was very personal and meaningful to me.   My son, Jeremiah, had him as a teacher in his freshman year.  When Jeremiah came home on weekends to visit he was most excited about this class and always showed us his work and notes.  It was obvious that he enjoyed this class and it was helpful to him.   I was so pleased that a godly man was influencing my son.

It wasn’t the content of the class (though it was excellent), but the character of the man that was teaching that had blessed my son’s life.   I will always be indebted to him because of the impact he had on Jeremiah.    These are the kind of people you pray that your children will be exposed to and learn from. 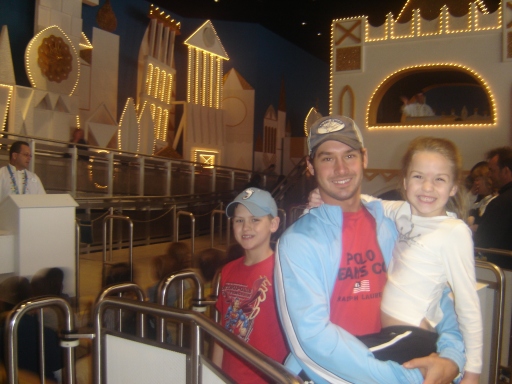 Jeremiah with Jake and Aubrey at the “It’s a Small World” ride at Disney World.

There was a quality in Tommy Troxel’s life that touched my son’s heart.  It was kindness.  He was kind – and he was consistently kind, every day to everyone.    He readily expressed his heart to his students in an individual, personal way.   Jeremiah told me of the frequent times this good man encouraged him and spoke kind words to him.   They weren’t casual words, but carefully chosen and crafted to minister to my son.   The result was that he made a difference.

The students knew that he loved them and cared for them.   It again proves the old saying that, “People don’t care how much you know until they know how much you care”.   Credentials are important, but compassion and kindness open the heart of a student to want to learn.    Howard Hendricks nailed it when he said to future teachers, “Remember that you are teaching people, not material”.

Kindness is not only important in the classroom, but also in the family.    God says that “Charity…is kind…”  (I Corinthians 13:4).    Love is kind; if you aren’t kind, you aren’t loving.     The word “kind” means “a disposition of consideration or a benevolent act given in a practical way”.

Love is not a noun, but a verb.   It is something that you do.   It is being kind.     Love isn’t a feeling, but an action.   It is measurable and observable not impractical.

Kindness is both a disposition and a behavior.   It includes both attitude and action.    In the next series of posts I’ll write about the kindness of love, what it looks like and how to have it in our lives.    People are attracted to those that are kind and repulsed by those that are gruff and inconsiderate.    I don’t want my wife and children to dread being with me because of my unkindness.

Someone wrote, “Home is the place we go when we get tired of being nice to other people”.   This is more often true than not.   I have a message I sometimes bring in family conferences on “Why We Say the Meanest Things to the People We Love the Most”.   It’s interesting when I simply announce the title that I have the attention of the audience from the beginning because of the reality of the problem in our homes.    When kindness is absent, love is absent.

I am so grateful for Mr. Troxel and the influence he had on my son’s life.   He was an excellent teacher, but more than that, he was a great man.    It was his kindness and love that made a difference in Jeremiah’s life.    If I would influence my children for God and good, it requires that I love them; and that means I will be kind to them.