Posted on July 15, 2013 by familyencouragement

My upbringing was very simple.   We were very common people.  Our clothing was simple…our house was simple…our car was simple.    I never thought anything about it until I got older and had my own family about the simplicity of my life as a child.

One of the ways that we were able to do things was because someone loved us and helped us during hard times.   I was unaware of it until I discovered it later on through stories my parents told me.

For example, when I was in the seventh grade I played football at the McCormick YMCA.  We were sponsored by the local FOP and had the best uniforms in the whole city.    I was only twelve  years old and had no idea of how much it cost for me to participate in the league.   Dad took me to practices and came to my games.   It was a fun year that I shall always remember.

In my 30’s I was riding around with my father talking about that season of my life, how much I enjoyed it, and he told me something that I never knew about that year of football at the Y.      When he went in to pay the fee for me to play it had already been paid.

I asked Dad if he had any idea who had cared for it and he told me that it was Bill Childress, one of my coaches and one of his dearest friends.   Bill was in Mom and Dad’s wedding as a groomsman so they went way back, even to high school days.

I was deeply touched that someone would care for me, Dad and our family that much.  Through the years I have often thanked Bill for his kindness and sacrifice for me.     His unselfishness and love has drawn my heart to him for the rest of my life.

Coach Bill Childress and myself.

In 1976 a friend and mentor, Lloyd Smith, a song writer, had a major concert with some of the top singers in America featuring his music.     Though I was only eighteen we were close and he wanted me to come to this special event.   The problem was that at that time I was about ten hours away at a youth camp (it was in the summer) and I had no way to get there.

Another friend of Lloyd, Jack Parker, was also attending the camp as a chaperone and was flying back to Chattanooga to the concert and asked Dad if I could go with him on the flight.  My father agreed and Jack and I flew to the concert site together.

Years later Dad told me that when Jack had asked him about me going on the plane with him that he had declined because we didn’t have the funds for it and that Jack paid for it myself.    I didn’t know that at the time.   I will always be indebted to Jack for his thoughtfulness to me.   His unselfishness touched my heart deeply then and still does to this day. 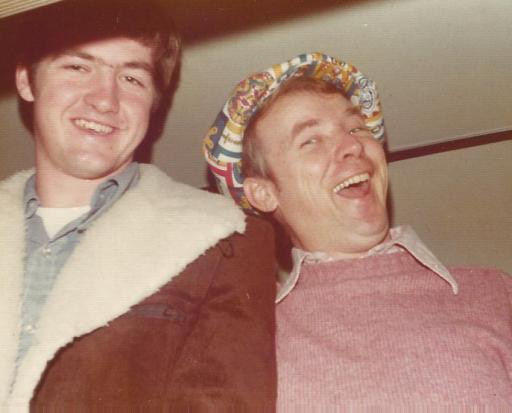 My good friend Jack Parker on one of Dad’s bus trips to Gatlinburg with our teenagers at church.

In the early days when I pastored our church we went through some very lean times financially.   My vision has always been bad and my prescription was old and I needed new glasses.   A young couple in our church that was going through their own financial hardships took their tax return check which they needed very much and paid for my glasses.    I never find out about anonymous gifts, but somehow later I did discover who had done that for me.   (If I had known who it was from up front I would have given it back to them).

Understand that I don’t “poor mouth” or advertise personal needs, but this sweet couple found out about it and helped me at a vulnerable time in my life.   To this day I am deeply humbled and grateful to them and have a sense of indebtedness and closeness to this precious couple for their sacrifice for me.

When God created His church it was to be more than an organization that was run like a machine only to crank out certain outcomes.   It is an organism united by the very life of Jesus Christ within each believer.   One of the key expressions of this life is that we love each other even as Christ loves us.   A church that doesn’t love people will be out of business soon – and in reality is not a church at all.

A life that is meaningful is not the result of getting your own way, but living for others.    If you don’t love people they will not receive your ministry, no matter how true and correct your message.  It’s true, people don’t care how much you know until they know how much you care.

There is a tombstone in a small English village with the following inscription engraved on it.  “Here lies a miser who lived for himself, and cared for nothing but gathering wealth; now where he is or how he fares, nobody knows and nobody cares”.

This was the heart of the church at Corinth’s problem; they had a lot of ability and gifts, but they didn’t have love for each other.   Sandwiched in between teaching on spiritual gifts in chapters 12 and 14 of I Corinthians is the most practical teaching on love in the Bible in chapter 13.

There we are given specific, measurable characteristics of what it means to love someone – at home, work, at school, and church.   They are enumerated for us in 13:4-7.    One quality is that love “seeketh not her own” (13:5).

The word “seeketh” means “to desire, seek and inquire after in a diligent way”.     Love is not selfish, it doesn’t desire or pursue it’s own way.

When a person is unwilling to serve it’s a symptom of a deeper problem; the real problem is a lack of love.    Sometimes leaders push and cajole to try to motivate people to get involved in ministry and, at best, it only lasts a short time.   It’s a heart problem.    When we love people we are not selfish with our time, energy or money.

The Bible says, “…by love serve one another” (Galatians 5:13).   That’s an interesting verse.   It’s possible to serve without love.   It’s dry duty without joy or enthusiasm.

Our work ought to be motivated by our love rather than a selfish agenda.   The Bible speaks of a “labor of love”  (Hebrews 6:10; I Thessalonians 1:3).    Genuine love motivates us to serve without being pushed or being compelled by guilt.

I think this is why older couples often say they never understood true love until years after their marriage.   Early on we don’t even realize how selfish we are and how it taints every part of our lives.

One way my selfishness was revealed to me was in my need to be right all of the time.    As I have grown spiritually and in Christ’s love I have learned that I am not right all of the time with Paula and the kids and that even when I am I don’t have to win on every point.

One of the best days of your life is when you realize (and admit) that you are selfish and see things from a lens of how it will affect you.    This is the primary way our sinful nature expresses itself, in selfishness.

The starting place in dealing with selfishness is to recognize your bent to selfishness.   The word “selfish” is defined as “caring only for one’s self, being concerned with one’s own interests regardless of others”.

Have you ever said of another person, “That person is so selfish”.   I have.   It is so obvious to us and they are blind to their self-centeredness.   Here’s something you rarely ever hear, “I am so selfish”.     We are blind to it in our lives, call it other names, and can defend our decisions to protect our time, energy and money.

When you look at a group photo what is your first inclination?   To look at yourself.   In fact, we tend to evaluate the picture by how we look, even at the expense of how well others might look.     That is selfishness.

Dale Carnegie tells of a survey that New York city did many years ago as they monitored telephone conversations on the most common word used.   It was the word “I”.

Love is just the opposite.  It is concerned for others and their welfare.     There are three characteristics in the Bible of how love is unselfish.   We’ll consider those in upcoming posts.

Love “seeketh not her own” (I Corinthians 13:5).   May we be attentive to how self-centered we are today, especially with our spouse, children and siblings.    Identifying and admitting the problem is half-way toward solving it.