Love will not Retaliate

Posted on August 31, 2013 by familyencouragement

I know a pastor that had to make a difficult decision concerning a staff member  to let him go.   The individual became enraged and rather than leaving quietly began a campaign to destroy the pastor.   Somehow he got a mailing list with all of the addresses of the people from the church and wrote a letter highlighting his grievances and the flaws he saw in the pastor.

His desire was to cause as much a problem as he could because he felt he had been treated unfairly.   It hardly caused a blip in the congregation.    The people knew their pastor’s heart and character and the accusations and complaints didn’t stick.

However, I know that pastor well and spent time with him immediately after it happened.  It hurt him deeply.   The staff member went on to another place of ministry and the church he left continued to prosper, but his desire to retaliate a perceived injustice could have divided a church.

My pastor friend never retaliated, wouldn’t say anything bad about the person, and won’t to this day.   What was the difference in the two?    One understand what it meant to genuinely love and the other didn’t.

To really love is not just difficult, but it is painful at times.    The Bible says that love “rejoiceth not in iniquity” (I Corinthians 13:6).    This means that when we love as God does we aren’t glad when bad things happen to people that have hurt us.   Only the love of God in our heart can enable us to do that.

To retaliate means “to return like for like, to return a wrong or an injury with the same treatment”.    (This Scripture does not teach passivity in terms of protecting yourself, your family, or soldiers involved in war.   In fact, the Bible teaches both a personal and national responsibility to do so.   The Scripture above deals with retaliation in personal relationships).

What would cause a person not to retaliate when they have been hurt?   Love.    No one has ever been offended as great as God.   He is perfect, holy and righteous and sin is an offense to Him and His nature.   It is impossible for us as sinners to comprehend the holiness of God.   That is the purpose of Christ’s death on the cross, that His willing sacrifice on our behalf would pay the penalty of sin so we might be reconciled to God.

Before He was even crucified on the cross He withheld retaliating though He was treated worse than any other person that ever lived.   Read carefully how He responded to injustice and personal attacks.

“For even hereunto were ye called: because Christ also suffered for us, leaving us an example, that ye should follow his steps: Who did no sin, neither was guile found in his mouth: Who, when he was reviled, reviled not again; when he suffered, he threatened not; but committed himself to him that judgeth righteously”.   (I Peter 2:21-23)      Jesus didn’t retaliate though He could have.    He could have called thousands of powerful angels to destroy those that were hurting Him, but He didn’t (Matthew 26:53). 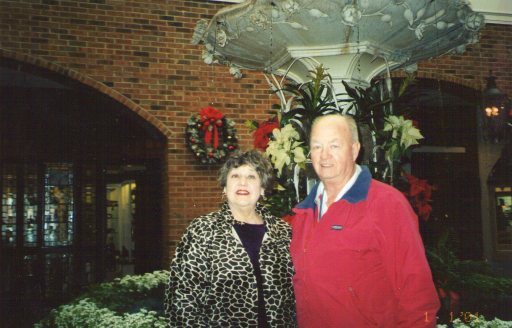 Mom and Dad at the Opryland Hotel in Nashville, Tennessee in the late 90’s. Dad often drove groups there and it was one of Mom’s favorite places to go with him. I’m glad I grew up in a home where my parents never retaliated against others. Melanie, Hoss, and I were ignorant of a lot of negative things because they protected us from them.

We see the same quality of not retaliating often in King David’s life.  Chased by a mad King (Saul) and betrayed by friends and those in his court he didn’t respond in like kind.  Perhaps that is one of the reasons he was called a man after God’s heart (Acts 13:22) because he refrained from retaliating.   Here are his words during one of those times.

“They also that seek after my life lay snares for me: and they that seek my hurt speak mischievous things, and imagine deceits all the day long.  But I, as a deaf man, heard not; and I was as a dumb man that openeth not his mouth.   Thus I was as a man that heareth not, and in whose mouth are no reproofs.”   (Psalm 38:12-14)     This is a man that understood love, even though it was difficult and painful to do so.

This principle (and responsibility) of not retaliating is in both the Old Testament and the New Testament.

“If thou meet thine enemy’s ox or his ass going astray, thou shalt surely bring it back to him again.  If thou see the ass of him that hateth thee lying under his burden, and wouldest forbear to help him, thou shalt surely help with him.”   (Exodus 23:4-5)     Read this again and apply it in today’s vernacular.   Would you treat your enemies this way?    This is how people know we are believers, not just by our creeds and adherence to doctrinal statements.

Here’s a similar expression of this way of living from the New Testament – “Ye have heard that it hath been said, Thou shalt love thy neighbour, and hate thine enemy.  But I say unto you, Love your enemies, bless them that curse you, do good to them that hate you, and pray for them which despitefully use you, and persecute you;  That ye may be the children of your Father which is in heaven: for he maketh his sun to rise on the evil and on the good, and sendeth rain on the just and on the unjust.   For if ye love them which love you, what reward have ye? do not even the publicans the same?”   (Matthew 5:43-46)

When we are wronged in personal relationships we are to leave the justice to God; it is our task to love people and meet their needs – “Dearly beloved, avenge not yourselves, but rather give place unto wrath: for it is written, Vengeance is mine; I will repay, saith the Lord.   Therefore if thine enemy hunger, feed him; if he thirst, give him drink: for in so doing thou shalt heap coals of fire on his head.  Be not overcome of evil, but overcome evil with good.”   (Romans 12:19-21)

This is how life in a Christian home and church is supposed to be like.      Do you ever retaliate to your spouse?    When they misunderstand you or are rude to you, what is your response?    The temptation is to give it right back to them.    But that isn’t love.    Love doesn’t retaliate.

Here are some great words that would guide every home if it would be one where peace, joy and love abound.

“Finally, be ye all of one mind, having compassion one of another, love as brethren, be pitiful, be courteous: Not rendering evil for evil, or railing for railing: but contrariwise blessing; knowing that ye are thereunto called, that ye should inherit a blessing.  For he that will love life, and see good days, let him refrain his tongue from evil, and his lips that they speak no guile: Let him eschew evil, and do good; let him seek peace, and ensue it.  For the eyes of the Lord are over the righteous, and his ears are open unto their prayers: but the face of the Lord is against them that do evil.”    (I Peter 3:8-12)

One of Abraham Lincoln’s earliest political enemies was Edwin M. Stanton.    He mocked him by calling him names such as a “low cunning clown” and “the original gorilla”.   He said, “It was ridiculous for people to go to Africa to see a gorilla when they could find one so easily in Springfield, Illinois (Lincoln’s hometown)“.

Stanton never received a response to his hurtful words.    Later when Lincoln became president and needed a Secretary of War he chose Edwin M. Stanton.    People couldn’t believe it after the rancorous words from Stanton.   When asked why he chose him, Lincoln said, “Because he is the best man for the job”.

After Stanton served in his cabinet for several years and got to know him, Lincoln was murdered without warning.  As Stanton looked at his still body of his former enemy he said, “There lies the greatest ruler of men the world has ever seen”.   I’m sure that Lincoln wanted to strike back at times, but didn’t and it won him respect and friendship from one that used to hate him.

This true story with the ensuing result of a friendship is supported by a Bible principle – “When a man’s ways please the Lord, he maketh even his enemies to be at peace with him”.   (Proverbs 16:7)

I read the poem below years ago that spoke to me deeply about the difference in forgiveness and retaliation.   It ministered to me and caused me to think about the emptiness of living a life of retaliation.    I hope it will do the same for you.

You did not mean to loose the bow
That launched the arrow toward my breast;
Nor did you plan to shake the limb
That so disturbed my downy nest.

You did not make the venom that
Your tongue so quickly shot my way;
Nor did you mean to loosen all
The fiery snakes I fled today.

You did not weigh the giant stone
Hewn by the words you spoke to me.
‘Twould not be there had you but known
The load with which I came to thee.

I know, for I have hurled some stones,
I vainly tried to have returned.
My quiver’s empty far too oft;
My fiery darts too much have burned.

I own some venom and a bow
Which oft unite in deadly flight
To far exceed in damage done
The arrow’s wound and serpent’s bite.

I know the empty victor’s guilt
When kneeling o’er my fallen prey.
I’ve held the sword when blood was spilt,
While joys of winning fled away.

So may I love you when you hate,
And may I bless you when you curse.
I cannot now retaliate,
For yesterday ’twas in reverse.

May I return an answer soft
To turn away thy hasty wrath;
For I have tasted far too oft
The bitter herb my friend now hath.