A Man and His Children

Posted on December 5, 2013 by familyencouragement

One of the greatest days of my life was on March 29, 1984.   That evening our first child was born and I was in the room when he was delivered.   I will never forget the many details of that day – I can recall them with great clarity.    Next to when I became a Christian and was married, it was the best day of my life.   I became a father and the title “Daddy” is the most precious I will ever wear.

A man of God is first deemed such by his family.    If you want to find out what a man is really like, ask his wife and children.    If a man’s religion won’t work at home it won’t work anywhere.    Great damage is done to children when their parents only appear spiritual away from home.

Hypocrisy leaves it’s deepest impact on our kids.   I read where that those easiest to reach with the gospel were children raised by parents that were authentic and genuine in their spiritual walk; the next easiest to reach were those that had parents indifferent to the things of God; the children that had the most difficult time coming to Christ were those whose parents lived one way at home and another way at church.    I agree with him though I know there are exceptions in each area, but it’s more than an interesting observation.   It has merit.

Men tend to measure their success by what they accomplish in the workplace.   One of the first questions a man will ask of another man when they are getting to know each other is, “What kind of work do you do?”    Rarely is the query given, “Tell me about your family”.    Perhaps it is because the question about occupation is not as personal, but it is also because it’s where men typically gain their significance.

It’s easier to succeed at work than at home.    This is true of pastors, too.    Too often ministry tasks dominate their schedule and they neglect their families.   Sometimes it’s the pastor’s fault and sometimes the congregation has unrealistic expectations.    I have met spouses and children of pastors that were jealous of the time and attention he gave to the church instead of them.

Harvey Springer, an evangelist, was speaking to pastors and exhorting them to keep their families as a priority in their lives.   He said, “Preachers, don’t tell me how many people you had in Sunday School, let me see your children”.     I agree with him.   That doesn’t diminish my calling or responsibilities as a pastor, but my work at church is not to take precedence over my work at home.

For a pastor to be ordained he appears before a group of godly men, both pastors and laymen, and is quizzed on his calling, his grasp and knowledge of Bible doctrines, his philosophy of ministry and like matters.    Rarely have I been on an ordination council when the candidate was asked about his relationship with his wife and children, his commitment to his marriage and children, and the priority they would have in his ministry.

I read a story about a man that was attending a county fair in Dallas, Texas.   One exhibit especially attracted his attention.  It was a prize-winning hog (whatever that is!) and caring for the animal was a young teenage boy.  He had an angry, sour countenance, emaciated frame, was disinterested in the people asking him questions and seemed to be intent on smoking as many cigarettes as possible in the shortest time possible.

The boy’s father was the owner of the prize-winning hog.   The observer wrote that “the father was a success at raising hogs, but a dismal failure at raising a son”.     Whether you’re an engineer, sales person, postman or pig farmer, it’s always easier to excel at work than it is at home.    It’s a compromise easy to make.   We get more attention and approval at work than for what we do with our children.   Few applaud us or encourage us in our roles as parents or in our marriage.

What are the characteristics of God’s man?   One of the best passages in the Bible on the qualities of a man of God is Psalm 128.   While it is only six verses in length it has some powerful truths.    One distinction pertains to his wife and children – “Thy wife shall be as a fruitful vine by the sides of thine house: thy children like olive plants round about thy table.”   (Psalm 128:3)

Often the Bible uses metaphors to illustrate and better convey the meaning of a truth.   Here he compares the family unit to a plant (“vine”) and a tree (“olive plants”).      Specifically his wife represents the vine and his children the olive plants.

His wife is called a “fruitful vine”.    Of course, this speaks to the fact that she is a mother. The land of Israel was filled with vineyards (Deuteronomy 6:11) and still produces some of the best grapes in the world.   It is not unusual for one bunch of grapes to weigh between 6-7 pounds.    When Moses sent the spies into the land they brought back a sampling of the bounty of the land and it included huge clusters of grapes (Numbers 13:23-24).

There are two perspectives in this text that a man of God has toward his children.   Sadly, in our day they run counter to how many people view children.    A godly man will see his children the way God does.

First, children are a blessing of the Lord.    His wife, the mother of his children, is called “…a fruitful vine by the sides of thine house…” (Psalm 128:3).   This was a common picture in Israel of a trellis beside a home where the vines grew until they bore fruit.

It was a great blessing to have a fruitful vine!   It provided a source of income as well as provision for your own home.   Likewise, children are an evidence of God’s blessing (Deuteronomy 28:4).  Many people see them as an inconvenience or even a curse.   We should value our children as God does, a “reward” (Psalm 127:3), not punishment.

When my children were small we were at one of their soccer games in the fall watching the game with some friends.   At the time we had four children and three that weren’t involved in the game were running and playing behind us.   My friend glanced at them and said to me, “I don’t know how you and Paula are able to have any sanity with four kids.   I’m glad they are yours and not mine”.

The comment was so unexpected I didn’t know how to respond to it.   The smart aleck side of me wanted to reply, “I’m glad they’re mine, too”.    Certainly there are times as a parent when it is difficult and tough, but through it all my kids are a great blessing to Paula and me.

I have a debilitating illness and in recent years I became heavily discouraged, even depressed, over my inability to get better.    Through those difficult days God used my children to bless me in so many ways to lift my spirit and give me hope.   Their love for me made a difference in my life.   Truly, my sons and daughters are one of God’s choicest blessings in my life. 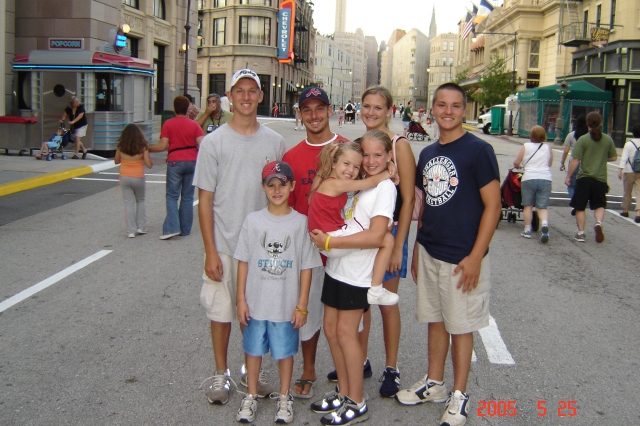 Another way a man of God sees his children is as a valuable asset.    God said “…thy children (are) like olive plants round about thy table”.   (Psalm 128:3)    As he looked around his dinner table he saw the potential of his children.   They were like little olive trees that would one day bear fruit that would bless others and make a great contribution.

The olive tree was a sign of prosperity to Hebrew families.   Oil extracted from the berries was used for cooking, medicinal purposes, and fuel for lamps.   Even today they are a common sight in the land of Israel.    I read where twenty gallons of oil can come from one olive tree each season.

It takes fourteen years for an olive tree to reach maturity, but it will be productive for many years.   Our children, too, require a lot of training in their early years, but when they mature spiritually and emotionally they are valuable in the home and in society.    All of the work involved in discipline and training is worthwhile when we see our children mature and begin to add value wherever they go.

Haim Ginott said, “Parents often talk about the younger generation as if they didn’t have anything to do with it”.    The good news is that we can influence our children, but we must see them as God does as blessings and of priceless value.

The most significant people in the world to me are my Dad and Mom.    I never felt that their jobs were more important to them than I was.   I always knew that they believed in me and valued me.

Me and my brother, Hoss, with my Mom.

I have been in pastoral work since 1977.   My sister is a pastor’s wife and has been for many years.   My brother recently took early retirement from a good job to literally travel the world as a missionary telling people about Jesus and how He can change their lives.    To whatever degree that we have been a blessing and added value to people can be traced back to our parents and their influence in our lives.

Dad with Melanie and myself when he was inducted in the Madison County Athletic Hall of Fame.

Please don’t think I’m suggesting that your children have to be on a church staff or a missionary to honor the Lord and be a blessing to people.    I don’t believe that at all.  We need authentic Christians in the marketplace today more than ever.    My emphasis is simply that what parents do makes a difference – and it is all worthwhile.

Today, ask God to help you see those children and grandchildren of yours as a blessing and precious gift from God rather than a burden.    Remember their value and let them know it by believing in them and telling them how special they are to you.    One day what you have invested in them through your attitude of seeing them as a blessing, valuing them with your time and energy and sincerely loving them will boomerang back to you.    I know that has happened in my life.

Jeremiah, Jon, Ashley, Jordan, April, Jake and Aubrey – each of you have enriched my life in more ways than I can express.   Thank you for loving me and helping me in my darkest days.    You have made a difference in my life.

Formal night on a cruise with April Joy.

1 Response to A Man and His Children