Posted on January 9, 2014 by familyencouragement

I have been a member of five churches in my life.     The best things that have ever happened to me have been through my affiliation with those different church families.    I am so grateful for all of my pastors and those in the congregation that have blessed my life and that of my family.

I’ve also been hurt and have hurt people in those fellowships.   In almost every case it wasn’t intentional, but it happened.    No church is a perfect church.  It has well been said that a church is not a museum, but a hospital.   It’s a place where people with problems come for help.   Whenever you put two frail, weak sinners there is going to be conflict -whether it be in a family, friendship, or a church.

A humorous story illustrates the challenges we face at church.   A man was stranded on an island for many years and finally was discovered and rescued.   As they were gathering his belongings to take him home someone noticed there were three separate huts that had been built by the man.

He said, “Why did you build three different huts?”   The stranded man replied, “Well, the first one is my house; the second one is where I go to church; and the third is where I used to go to church”.

It’s not wrong to leave a church.  My life has been enriched by dear people that have joined our church from other churches through the years.   However, often it isn’t because of a job move or a doctrinal heresy people leave, but because of bitterness.    They have been hurt.

The Bible warns about the consequences of bitterness very clearly – “…lest any root of bitterness springing up trouble you, and thereby many be defiled”.   (Hebrews 12:15)

There is a two-fold result: (1) the one that is bitter is troubled and (2) others are defiled by his bitter spirit.    Bitterness will “trouble” a person.   The word means “to be annoyed” and has the idea of having a cluttered and distracted mind.    A bitter man is unable to focus and enjoy life.

It will also cause “many (to) be defiled”.    The word “defiled” means “to stain, contaminate or pollute”.    This effect is on “many” people.   This means a bitter person becomes a negative, unhealthy influence.   They pollute the minds of others concerning the one with whom they are bitter by their acerbic words and attitude.

This person cannot maintain wholesome and positive relationships over a sustained period of time because of the “root of bitterness” that has intertwined itself in their heart.   Remember that bitterness isn’t hatred (it can lead there), but harbored hurt.    This means that the people that we love the most and are the closest to have the greatest likelihood of hurting us.

One of these places is in church.    Bitterness will affect a local church.    One of the most precious aspects of a church is the fellowship we share with our friends.    When we allow resentment toward others to stay in our hearts it affects us – and others, especially our children.

We have all heard of churches that have split – and it leaves an ugly scar on not only the parties involved, but also the community.   I have observed that almost exclusively churches do not split over basic and crucial doctrinal issues, but petty and insignificant issues.    People take sides, words are said, feelings are hurt.   And the real victims are our children.

I have found this true in ministering to people.   It’s much easier to minister to someone very ill in the hospital than it is in a counseling room with one with a wounded spirit.    The person in the hospital bed knows he is sick, but the one with a resentful, bitter spirit usually doesn’t know they, too, have a problem.

For a while they may attend the same church with the one that hurt them, but the relationship cools.   When they see the one that wounded them they will avoid them.    If forced to talk, the conversation is shallow and guarded.   A once close relationship becomes formal and superficial.

There is a terrible cost to this scenario.   A church filled with bitter people is a powerless church.   The essence of Christianity is relationships – relating to God and to people.   When these relationships are not right, the church is crippled.

Another long-term cost is what it does to our children.    Bitterness “defiles many”.   When they hear a bitter parent complain or attack others it has a detrimental effect on them.    Sometimes it isn’t the parents that are bitter, but encountering other people in a church that have unfulfilled expectations and speak openly of them.

I remember several business meetings where a man would publicly oppose our pastor over trivial matters.   As a boy I watched and listened to this man’s angry voice directed at the man I heard speak to me each week about God.   It not only confused me, but I began to dread business meetings.    Tragically, the man that regularly harassed my pastor had children that bailed out on God and the church.

My position in the churches I served was that of being a Youth Pastor.   A number of those young people went to Christian colleges.   I always gave them the same advice – and it was from my own experience growing up in church and going to a Christian school myself.

For fifty-five years I have been attending church faithfully, almost thirty-seven of those in leadership positions.    My oldest child has been attending church with us for thirty years.   My heart is that they would not have a father who was bitter towards God or other people.   If I am embittered I will “defile” them by my words and my spirit and they may do the same to their children. 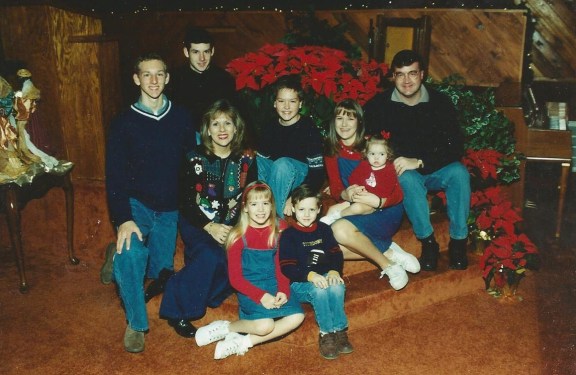 Our Christmas picture from 2002. Taken on the steps of our altar at church.

Perhaps you have been hurt from a bad experience in church (most all of us have).    Pause and consider the potential damage you have done to your children through your reaction.   It’s not too late to apologize to them and seek forgiveness and let them know you were wrong.   That just may be the first step for not only the healing of your own soul, but theirs, too.

Pastor of Friendship Baptist Church in Huntsville, Alabama. Married for 41 years with seven children and nine grandchildren.
View all posts by familyencouragement →
This entry was posted in Anger, Bitterness, Criticism, Revenge and tagged anger, bitterness, criticism, revenge. Bookmark the permalink.