Posted on January 14, 2014 by familyencouragement

Years ago I saw a friend I hadn’t seen in a long time.    While we were catching up on mutual high school classmates I brought up the name of someone with whom they were very close.    The reply was, “We don’t stay in touch anymore; something happened between us and we just haven’t worked it out”.

Friendships are damaged and even destroyed through bitterness.    The people we love the most can hurt us the most.    And a relationship that was once close and treasured has become distant and stale.    “We don’t stay in touch anymore” sometimes is not the result of neglect, but of having a wounded spirit.

It is very difficult to win a person back whom you have offended.   Which is easier, winning a military battle or winning back the heart of a friend that you have hurt?     God gives us the answer in His Word.

“A brother offended is harder to be won than a strong city: and their contentions are like the bars of a castle.”   (Proverbs 18:19)     It is easier to capture a city than to win the battle for the wounded heart of your friend.

We cannot keep from being hurt, but we can keep from staying hurt.   An offense allowed to fester in the heart isn’t static, but dynamic.   It grows and develops layers of hardness around the heart.    Transparency and openness is replaced by protecting yourself from being hurt again.    That’s what bitterness does to relationships; it destroys them.

The Bible says that “…their contentions are like the bars of a castle”.   (Proverbs 18:19)    The word “contention” has the idea of advancing an issue in a debate or argument.   This stems from words, actions, or decisions that has caused pain.

These wounds are “like the bars of a castle”.    This speaks of a mighty fortress that is protected from assault with its ironwork.   The way a bitter person “protects” their feelings is by justifying their feelings against the one that has hurt them.

In your mind there is a scale that comes into play when you have been hurt by someone.   On one side of the scale is “blame” and on the other side is “guilt”.    Here is the way it works.   When we become guilty (whether being the offender or the one being offended and having a wrong response) the “blame” side of the scale soars as the “guilty” side weighs heavy.   We know we are wrong and the only alternative is to admit it or to justify it.

When we confess to the wrong we have done (in causing the problem or in our response to being wronged) and seek forgiveness the scale is balanced and we have peace in our hearts.   However, when we justify and rationalize our feelings of bitterness the “blame” side is weighed down, but the “guilt” end of the scale goes up.

In other words, even though we know we are “justified” in our feelings, we still feel guilty.   Our guilt is never removed by blaming others or by justifying our actions.   Only confession and seeking forgiveness from God and others will balance the scale in your heart.  Peace is impossible as long as we are embittered, no matter how right others may tell us we are in our feelings.

The damage a bitter spirit does to our friendships over the years is bad enough, but there is another casualty that is more subtle.   Our children learn to respond to hurts the same way they see us do so.

I had been hurt deeply by a friend.   It was impossible to shake off as I never saw it coming and was unprepared for it.   Though I never mentioned it to our children they got word of it.   My friend had begun to share cutting words about me and some of my kids heard them, too.

One of my children who was aware of the negative words was with me one day when we encountered my friend.   We spoke kindly and graciously to each other.    As we talked I noticed that my adult child was looking at me incredulously.

After the conversation was over and we said our goodbyes my child and I walked in silence for several seconds.    Finally they said, “Dad, how did you do that?   Why were you nice to them?   Don’t you know what they said about you?”

“Yes, I do.   However, they were hurt and disappointed in me and though I wish they hadn’t, I can still choose my response.   I’m not angry with them and I don’t want you to be either”.

Have you ever considered that you are training your children how to have lasting friendships by responding properly to your personal disappointments?   We are showing them how to respond to hurts by the way we live.

Someone said, “Teaching is telling; training is showing”.    I believe God permitted my heart to be shattered that I might train them by showing them through my life.

My friend from high school that had not seen their friend in many years because they “hadn’t worked it out” yet?    Today they stay in touch regularly because their relationship has been restored.    Friendship is always worth the work it takes to maintain the relationship – even through disappointments.

Don’t allow bitterness to grow roots in your heart toward your friends.    It’s not just about your friendship, as important as that is.    Your children are watching, too. 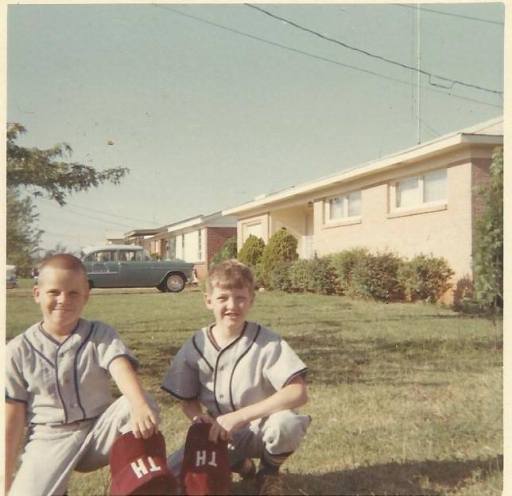 My oldest childhood friend, Steve Payne (left). We were neighbors from our births.