The Importance of Prayer in Parenting

Posted on June 19, 2014 by familyencouragement

When I was a boy our church had a special prayer meeting each Saturday evening at 9:00 p.m.    My father would often ask me to attend with him, but I refused because I was afraid to pray in front of people.   He never made me go with him and would sometimes go for several weeks without asking.

One Saturday night Dad asked me to go to the prayer meeting with him and I surprised him when I agreed to go.   After that it was rare that I missed.    My favorite part of that weekly appointment was listening to my father pray.   When Dad prayed he frequently called God, “Master”, and he said it with sincerity and a pathos that touched me and others that heard him pray.

I knew God was real to Dad because of the way He conversed with Him.   He prayed about a lot of things, but I was most touched by the times when he talked to God about our family.   Those will always be treasured memories.

It’s interesting how many fresh thoughts you have about parenting after you have your own children.   We see things from a different perspective, how we could have done things better, mistakes we have made, and things we did correctly.

Also, this new paradigm causes us to think about our own parents and how we treated them as we grew up.  “Did I do that to them?”    “Did I make them feel that way?”    “I didn’t realize how deeply my actions hurt my parents.”    These and other considerations intrude our thinking only after we have had children.

One of the things I came to realize after I became a father was how often my parents prayed for me and I was totally unaware of it.   Now I know some of the things they prayed for me, my sister and brother because I do the same for my kids.  They prayed for our protection, our purity, our salvation, our spiritual growth and maturity, the influence our friends were having on us, and scores of other areas with which children and teenagers grapple. 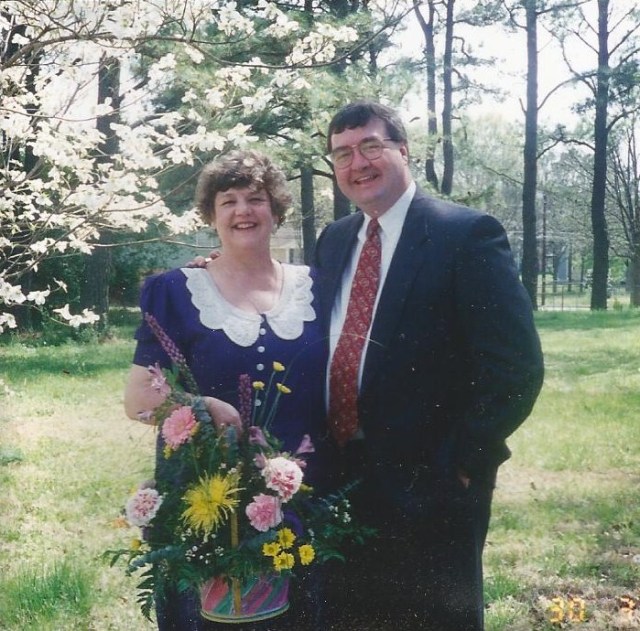 Mom and myself in our backyard on Easter Sunday.

My prayers have continued as my children have become adults; so I know Mom and Dad did the same for me.   For many years Paula and I made the trek from Chattanooga to Huntsville and back each weekend, 200 miles round trip.    Later we drove from Alexandria, Virginia to Huntsville and back a number of times, almost 1500 miles round trip.    They probably prayed more for our safety and protection while we traveled than I did.   Now, I find myself praying for my kids as they travel.

I pray for my adult children as they endure adversity and raise their children; my parents surely did the same for us.   What a humbling thought to know that they carried my burdens when I had no clue.    I believe the best thing Dad and Mom ever did for me was to pray for me.

An example of the importance of prayer in parenting is found in the story of Job.    He was one of the greatest men in the world in his time (Job 1:3),  a man of integrity (1:1, 8), a highly successful businessman (1:3), but he also excelled in another area.   He was an outstanding father of ten children (1:2).

It wasn’t the number of children he had that made him a great father, but his spiritual integrity and how he led them (1:8; 2:3).    People marveled at his wealth (1:3), but he was special not because of his money, but because of his character and his family.

Job’s integrity would not have been complete had it only been true in his personal and financial life; it also had to be true in his marriage and as a father.   He was a good father because he prayed for his children.

“And it was so, when the days of their  feasting were gone about, that Job sent and sanctified them, and rose up early in the morning, and offered burnt offerings according to the number of them all: for Job said, It may be that my sons have sinned, and cursed God in their hearts. Thus did Job continually.”   (Job 1:5)

He cared about the spiritual needs of his children and it was a priority in his life.    He offered a sacrifice on their behalf “early in the morning”.    This was not a hit or miss thing in his life; it was a conviction for him.   He prayed for them “continually” (1:5).    Every day Job offered a sacrifice on their behalf and prayed for them.   He carried a burden for their spiritual condition.

Prayer has an essential place in our role as parents.   In fact, some people wouldn’t be parents apart from prayer.   God intervened when they prayed and heard their cry and gave them a child.   This was true of Hannah.   She was barren and prayed for a child and God honored her request (I Samuel 1:5-11, 19).

On a personal level, this was true of Paula and me.    We had been married for almost five years before we had our first child, Jeremiah.   It was discouraging because we wanted to have children, but we couldn’t.  We began to ask the Lord to give us a child.   We promised to raise them to love and serve Him.

One night we were at a Bible conference in a distant city.   After the service I felt led to ask one of the speakers whom I respected greatly to pray for us.   After thanking him for his message that evening and for his influence in my life I told him our dilemma and asked that he would pray for us to be able to have a child.   He did so, very briefly and sincerely.    Within a year our first child was born. 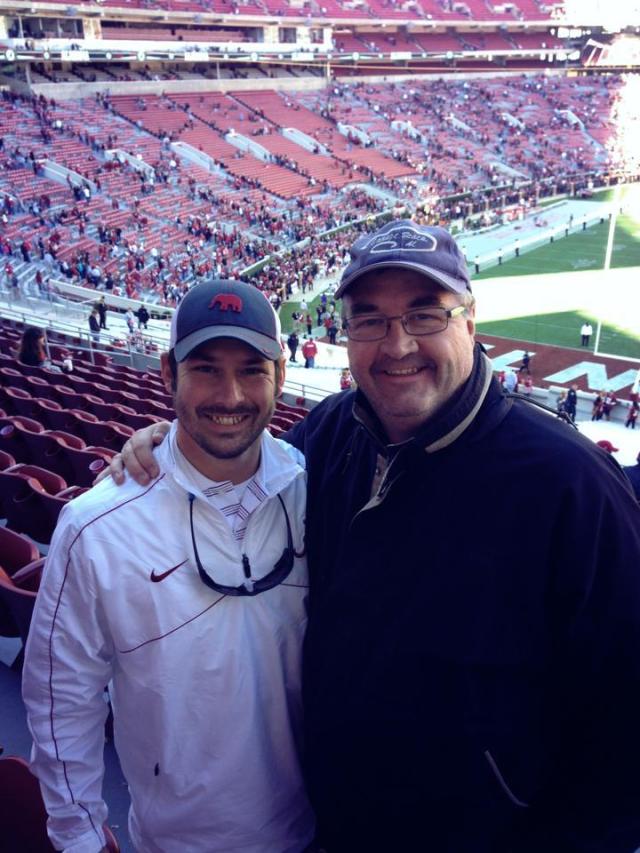 Jeremiah, my oldest son, and myself at an Alabama football game. He is a gift from God to his mother and me.

Please do not misunderstand.   I don’t believe you have to ask a preacher to pray for you before God hears you.   Not at all.   I do believe it was an act of faith for Paula and me to do so and God was honored by that.   I also do not believe that being able to have children is an indication of God’s favor on a husband and wife.   Within the mystery of God’s providence, it is not His plan for some to have children.

After having seven children I learned something.  It was much easier to pray and trust the Lord to have a child than after our children were born.  It’s an old adage, but true, “It’s easier to have a child than it is to raise a child”.    The prayers we prayed for our seven children as they grew required more faith and were given with more passion.   Each new season of life our kids went through brought new topics and needs in which to pray for them.   Three of them are married now and we still pray for them regularly and with more depth.

The reason we fail to pray is not that we are too busy, but that we fail to understand it’s potency.     Prayer can change things.    Prayer can effect things in our children’s lives that discipline and training cannot!   Our prayers move the heart of God to intervene and they make a difference.

In the daily grind of life we experience personal problems, financial needs, and health challenges.   Sometimes they are overwhelming and  it is easy to neglect praying for our children.   Then, a crisis with a child occurs and we are forced to pray; perhaps had we prayed for them in the first place the crisis would have been averted.

Years ago I heard someone share the following story about his son that shows the power of prayer for our children.   His teenage son had informed his father he was going to attend an event that night that wasn’t wholesome.   His father told him he didn’t want him to go and the son told him he was going anyway and there was nothing he could do about it.

The pastor went to bed with a broken heart and tried but couldn’t sleep.  He prayed that God would speak to the heart of his son and stop him from making a bad decision.   For hours he asked the Lord to intervene until finally exhausted, he fell asleep.

Just before the sun rose the father was awakened by his son kneeling by the bed with tears in his eyes.   He said, “Dad, I didn’t go to that place and I wanted you to know.   I just couldn’t go.   I’m sorry for arguing with you last night”.

Prayer can accomplish what counseling, warning, and discipline cannot. It is often the
missing ingredient in our child-training.    Dear parent, pray with your children; tell them you pray for them; most of all, pray for them.

God has used this song by Steve Chapman to encourage me to pray for specific areas while I pray and fast for my children.    I never listen to it without weeping as it expresses my heart desires for my precious children.    Perhaps it will do the same for you.

I am ever grateful that my Mom and Dad prayed for me.   Until I get to Heaven I will never know what God has protected me from and how He has blessed med because my parents talked to God on my behalf.   If you have a father and mother that has prayed for you, you have a great heritage!   Thank them for it and do the same for them, your children, siblings, and extended family.   It makes a difference.   More than you could ever imagine.

Pastor of Friendship Baptist Church in Huntsville, Alabama. Married for 41 years with seven children and nine grandchildren.
View all posts by familyencouragement →
This entry was posted in Uncategorized. Bookmark the permalink.