When Complaining is Legitimate

Posted on February 10, 2015 by familyencouragement

In May of 1985 I was startled in my sleep about 5 a.m. by a sharp pain that felt like a knife was piercing the small of my back.   I stumbled out of bed and literally crawled down the hallway trying not to wake anyone.

When I finally arrived to the couch in the living room I could only put my elbows on it in a kneeling position because I couldn’t sit or lie down.   The pain began to rapidly increase until it was excruciating and I could no longer bear it.   My occasional groan became a constant moan.

I cried out for my wife to come and help me.   We had just moved from another state and were staying with my parents for a short time, so not only did Paula respond, but my mother also came to my aid.   (My father was out of town on a business trip).

I begged them to take me to the emergency room; it was the worst pain I had ever experienced.  After arriving at the ER and tests I was given some strong pain killers, but it barely took the edge from the cutting pain which never subsided.

The diagnosis was that the source of my misery was a kidney stone.    I’m sure there is something more painful, but I haven’t experienced it.  After about eight hours the physical torment had improved to a tolerable level of discomfort and they let me return home. Gratefully, I passed the stone after several days.

Since then, I have had several other kidney stone adventures – all of them memorable!  During those attacks I have always done two things (in addition to taking pain meds!): (1) I have prayed and (2) I have complained.    In reality, they were both the same; my prayer was a complaint and a plea for mercy.

In recent posts I have written about the seriousness of complaining and that it is a sin against God.   There is an exception.   That’s when our hearts and bodies are hurting so deeply that the complaint is one of grief and begging for deliverance.

God is not angry with our complaints when they are born of suffering, either of body or soul.     He welcomes them and has pity on us.  This is a great encouragement to my heart.   My Savior hears my cries of pain and complaints and He doesn’t dismiss them or castigate me for them.

David was running for his life, hiding from an angry madman, King Saul, who hated him and was trying to kill him.   Hiding in a cave, isolated and alone, David prayed sincerely about his burden and fear.   The way his prayer was expressed is an encouragement to all those in times of great suffering and heartache.

“I poured out my complaint before him; I shewed before him my trouble”.   (Psalm 142:2)    David complained to God about his problem.    He delivered his soul as he “poured out” his situation and need.  (The words “poured out” have the idea of that which gushes out and is fully expended.  He said all that was in his heart until there was nothing more to say).

To even better understand the condition of his heart read the Scripture above in it’s complete context.   Notice David’s emotions, his loneliness and his desperation as he prayed.    He was tired, fearful and out of options.   It is exactly the way we feel at times.   It is a cry of both great need coupled with faith in a gracious and mighty God that can help.

“I cried unto the LORD with my voice; with my voice unto the LORD did I make my supplication.  I poured out my complaint before him; I shewed before him my trouble.
When my spirit was overwhelmed within me, then thou knewest my path. In the way wherein I walked have they privily laid a snare for me.  I looked on my right hand, and beheld, but there was no man that would know me: refuge failed me; no man cared for my soul.  I cried unto thee, O LORD: I said, Thou art my refuge and my portion in the land of the living.  Attend unto my cry; for I am brought very low: deliver me from my persecutors; for they are stronger than I.  Bring my soul out of prison, that I may praise thy name: the righteous shall compass me about; for thou shalt deal bountifully with me.”   (Psalm 142:1-7)

David’s utter honesty in his prayer life had influenced those closest to him.   Years later, when he became the king of Israel one of his primary associates, Asaph, also is recorded praying in a time of trouble – “…I complained, and my spirit was overwhelmed…”   (Psalm 77:3)

A different man with a different need, but the same heartfelt prayer.   Asaph had learned from David to bring his petitions to the Lord, even his complaints.

Complaining almost all of the time is sinful and against God’s good providence.   Sometimes, though, our prayers to God are complaints, and they are not wrong.  That’s how it is said that both David and Asaph, two godly men, talked to the Lord.

These are times when we open our heart and whatever is there is poured out unto Him – our sorrow, confusion, problem, and hurt.    Words of complaint are raw words from a broken person crying out to the only One that can help him, Almighty God.   They are spoken from one that is experiencing incredible pain in the moment.

Suffering and fear have a way of removing the clutter from your prayers to God.    I hesitate to call acceptable prayer complaining, but as David and Asaph have expressed it, I think there are times when it is the most genuine prayer we can offer.

I have a chronic illness that causes me to have debilitating headaches, usually several times a week.   Even after seeing several doctors no remedy has been found.    Pain has become my faithful companion.

Sometimes at home with my family or on a date with my wife it is so severe I put my head in my hands and  say, “I feel so bad; my head hurts so much”.  When I do that I immediately feel bad and apologize as I know they can do nothing about my problem.  You see, I don’t want to be a complainer.   It’s grates me when I spend time around negative people and I don’t want to be a drag on others, especially my family and friends.

I have learned that I need not apologize to my Heavenly Father for pouring out every crevice of my heart to Him.   He welcomes these outbursts of complaint.  We see this often in the spontaneous heartfelt prayers of God’s people.

“…I…have poured out my soul before the LORD…out of the abundance of my complaint and grief have I spoken hitherto.”   (I Samuel 1:15-16)

Recently I was perusing Facebook in the evening and came across an urgent prayer request for one of my closest friends as his life was in imminent danger.   Immediately I called his number, knowing he wouldn’t answer it, but had planned on leaving a message.   I figured his wife would check his messages and would call me with a personal and detailed update because we were friends with their family.

I was shocked and unprepared when she answered and very softly said, “Hello, Rick”.   I sputtered out what I had read and asked about her husband’s health.  Before I could get even a few sentences out she began to cry and said, “Rick, he’s gone.   He is here in the hospital and the machines are keeping him breathing, but he has been declared dead by the doctors”.

In the previous couple of months I had ministered at a lot of funerals, several of them for close friends.  I had already been in a season dealing with my own grief and sorrow.  When my friend’s wife told me about the unexpected death of her husband, my dear and close friend, something in me broke emotionally.    A tsunami of sorrow swept over my soul.

Some of my family was in the room with me and knew something terrible had happened.  After I had finished talking to my friend’s wife with the full weight of another unexpected loss the dam holding back my emotions and sorrow broke in my heart.    The tears flowed freely.

My tears became words and I cried out to no one but God, “No, God, no.   Please no.   I can’t do this.   I can’t lose another friend.   Oh, God, no”.   For a couple of minutes my sad and broken heart flowed with nothing but complaints about my loss as I numbly repeated a variation of those words. 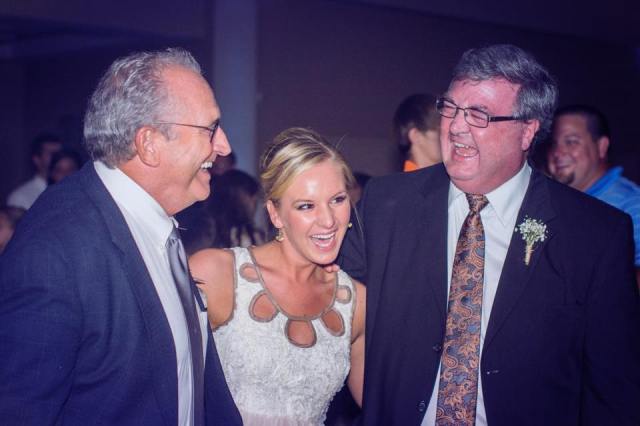 My good friend, Richard White, and my daughter, April, and myself, having a great laugh at my son’s wedding.

My precious wife came over and held me, saying nothing, just listening to the pain pour out through my words.    I wasn’t talking to her, though, I was talking to God.   And He could take it and didn’t mind it because of the brokenness of my spirit. 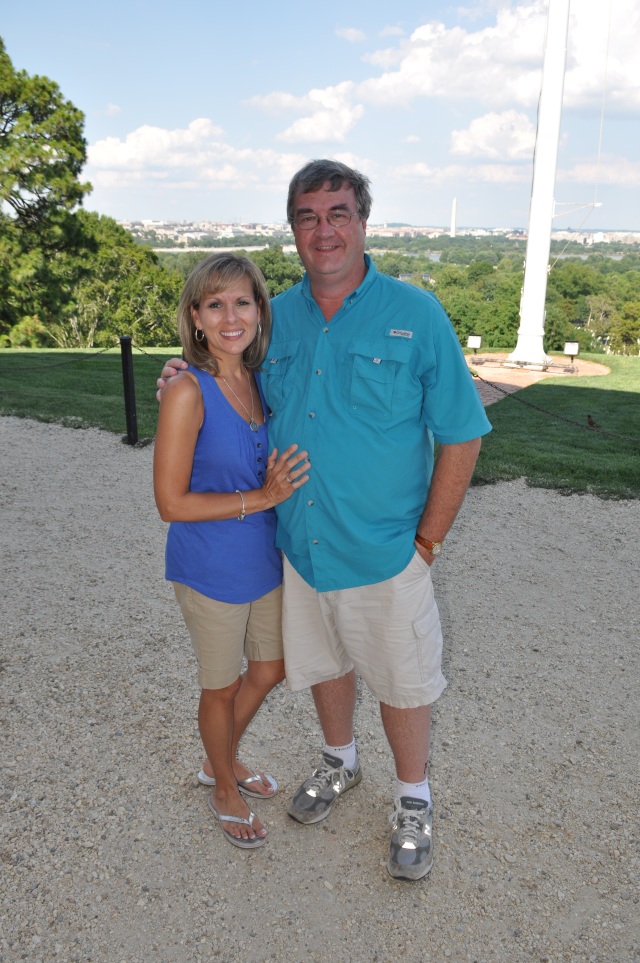 Paula and I at Robert E. Lee’s home in Arlington, Virginia overlooking D.C.

Every day for almost five weeks I have thought of my good friend and prayed for his wife, sons, and their families.    My complaining is gone, but the pain is still fresh.   I still miss my good friend, his laughter, encouraging words and calls just to check in on how things were going in our family and at the church.

But for a few minutes when I heard news for which I was unprepared and my heart was hurting and I couldn’t make sense of what was happening I complained.   And it wasn’t wrong.   My Father in Heaven embraced me and saw past my confusion and refusal to accept reality and just loved me.

Is your heart broken as you read this?   Are you trying to guard your words as you pray to keep from complaining to God?   Let me encourage you to just pour your heart out and share your burden with Him.   He specializes in broken hearts, even when we complain because of the hurt.