Posted on April 25, 2017 by familyencouragement

One summer I asked our congregation to turn in questions to which they wanted answers from the Bible.   One of the issues from the pile of questions was “How do we as parents deal with the empty nest?   Our last child will soon be gone from our home and we need some encouragement”.

As I write this, our baby girl is sixteen and will be a senior in high school next year.   Four of our children are married and have their own families; three of our kids live in other cities and we rarely see them.  Only two are with us in the house; it’s just a short while before Paula and I join our friends in having an empty nest.

So, how can one prepare for this moment?   Is it possible to be ready, to some degree, for this departure? 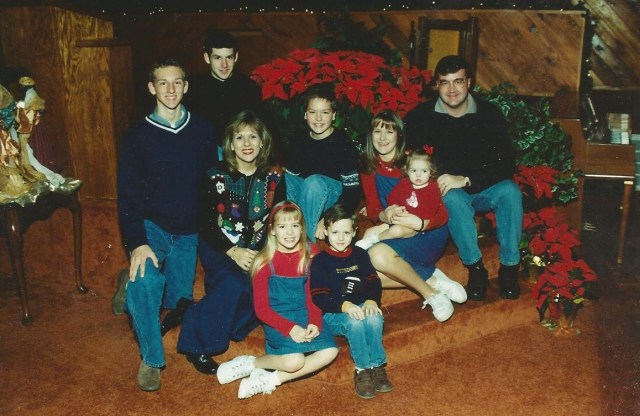 Our Christmas picture from 2002. Taken on the steps of our altar at church.

Here’s the key principle: a successful transition to a new lifestyle without children is largely determined by what you do before you have children and how you rear them in their formative years.

Perhaps that is why it is such a great struggle.    We’re not sure we put enough in their hearts during those formative years.    Suddenly it’s their senior year and now the clock is ticking loudly and we hear it.   Each event takes on a greater meaning and our hearts even begin to grieve a bit. 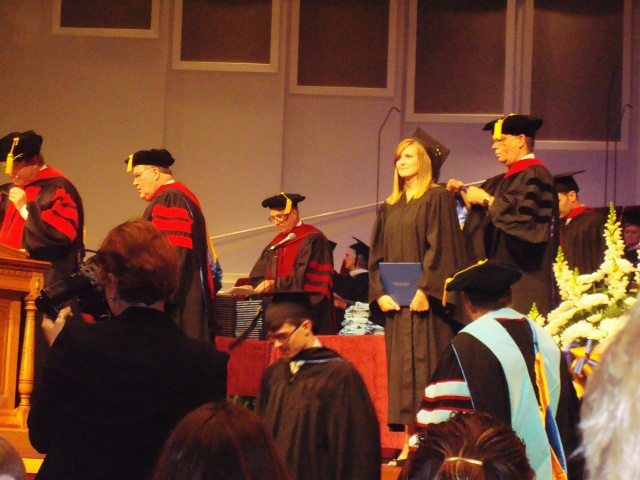 My father had a stroke and was physically debilitated in his speech and ability to walk.   I watched him gradually decline over several years and it was difficult.

In the midst of this season a preacher friend and I were talking about it and he asked me a question that clarified my feelings.    “Rick”, he said, “Do you find yourself grieving the death of your father even before he has passed away?”

I had never thought about it in those terms, but that is exactly what I was feeling.   The countdown was on in my mind even though I didn’t have a specific date, but I knew it was coming.

The same thing happens when our children, especially the last one, leave the nest.   The emotion will vary from person to person, but it will be there to some degree.

The Empty Nest is Inevitable

In the toddler or middle school years parents aren’t thinking of an empty nest much, if at all.  But the time is surely coming when we let go of our children – and it arrives faster than we realize.

Adjusting to the empty nest always involves releasing our children.  Here are four times we must release our children.   All of them are difficult, some more than others.

Release Them to The Consequences of a Rebellious Heart

Most Christian parents work to train their children to serve the Lord; they have dreams for them to continue in the way which they were raised.

When they are little we can’t conceive of them rejecting the truths we have modeled and taught them.   But sadly, it happens.

When it does, at some point we must release them to God and to the consequences of their choices.

God loves your child more than you do and can work in their heart, even when they are in rebellion.   As hurtful as it is, there may come a time when you release them to that in which you never thought they might be involved.

The path of sin brings pleasures, but it also has a bitter end.   The Bible says, “…the way of transgressors is hard.”   (Proverbs 13:15)    It is this pain and sorrow that will cause them to consider their ways.

Remember, the prodigal son did return home (Luke 15), but the father also released him to experience the consequences of his sinful behavior.   The father didn’t enjoy it, but it was necessary.

It wasn’t until the prodigal was permitted to experience the pain of his rebellion that he learned lessons that caused him to become broken, mature and grateful (Luke 15:14-17).

Many parents continually “rescue” their children from consequences and only enable them to go on in their sin.   “Tough love” means letting your child experience the university of hard knocks.

Release Them to Their Spouse

When our adult children are married they establish a new family unit of their own.   The Bible teaches that each person is to “leave” their parents and “cleave” to their spouse, above all others.

“Therefore shall a man leave his father and his mother, and shall cleave unto his wife: and they shall be one flesh.”   (Genesis 2:24)

When parents fail to release their child in marriage it strains the relationship between the couple and parents.  While it is wise for the young couple to involve their parents in advice and counsel, parents must accept that their time of primary influence has largely passed.

It’s impossible for our kids to understand how difficult it is to let them go until they have their own children and the wedding bells ring.

Paula and I were conversing about this subject and she surprised me by what she said.   “Rick, it’s more difficult for me to give up my sons to their wife than my daughters to their husband.  It’s because up until then I have been the only lady in their life and now I’m not; I’m in second place”.

Your child can’t have a great home with continual interference.     Let them go.

Release Them to God’s Will

Even the parents of the Lord Jesus were reluctant to release Him to His Father’s will.    After a holiday trip as they were returning home they discovered He wasn’t with them.  For several days they were separated before finally reuiniting.

“And when they saw him, they were amazed: and his mother said unto him, Son, why hast thou thus dealt with us? behold, thy father and I have sought thee sorrowing.  And he said unto them, How is it that ye sought me? wist ye not that I must be about my Father’s business?  And they understood not the saying which he spake unto them.”   (Luke 2:48-50)

Note the emotions his parents had, they were “sorrowing”.   It is a strong word that indicates they would never see Him again.   Jesus was only twelve years old but He already had a heart to do His Father’s will, to fulfill the “Father’s business”.

I believe success as a parent is helping your children to be obedient to the will of God.

Sometimes that means they may not live nearby, follow in your occupation, or make as much money as you think is necessary.

When I went to college to study for the ministry I was eighteen years old.   I was excited about taking classes and learning how to be effective in serving the Lord.

The morning came for me to leave for Chattanooga, Tennessee and I dropped by my grandmother’s house to tell her good-bye.    I wasn’t prepared for it.

As we embraced she and my mom began to weep.   I was stunned and just stood there, not knowing how to alleviate their hurt.   I knew I wasn’t going to be around as much, but it wasn’t like a final good-bye.

It was a sobering event for me.

Twenty seven years later Paula and I would go through the same emotional  experience with our oldest.    As we left his dorm we cried all the way home, not because we weren’t happy for him, but because we knew we were going to a house filled with only memories of our son.

It never got easy to walk away from the dorm – later in Chattanooga and also in Jacksonville, Florida.   But we had to release them to God’s plan for their lives.

Release Them to Death

This is an occasion we never think about unless our child has a serious disease or illness.   All parents expect to outlive their children, but that isn’t always true.

When a child dies suddenly the sense of loss is profound; it marks a Dad and Mom for a lifetime.   Even when the cause is a chronic illness that has been over a long period it is still painful.

Years ago I was walking through a cemetery visiting the graves of friends and church members, remembering them and thanking God for their lives.   One area was solely dedicated to babies and two of our pastors had children buried there.

After pausing at each little grave, I walked around and read the headstones of other precious little ones.   I discovered that another family in our church had buried a child there.  It had happened before they came to our church.    I never knew.

We see the profound grief of a father over the unexpected death of his son when Jacob thought his son, Joseph, had died.

“And Jacob rent his clothes, and put sackcloth upon his loins, and mourned for his son many days.  And all his sons and all his daughters rose up to comfort him; but he refused to be comforted; and he said, For I will go down into the grave unto my son mourning. Thus his father wept for him.”   (Genesis 37:34-35)

One can’t miss the depth of his sorrow.

The saddest funeral I ever had was for a nine year old boy.  I didn’t know the family but had been contacted by one of their friends to help them with the service.

The parents were inconsolable.   It was heart-rending to hear their cries and words to their child in the coffin.   I’ll never forget it.

A year after the funeral a lady walked into my office.  I didn’t recognize her.   I was shocked to learn it was the mother of this little boy.   Her grief had aged her.   She and her husband had divorced; they couldn’t deal with the incredible sadness in their hearts.

The terrible reality is that sometimes children do pass away before the parents.   Though you will never forget them, as time passes God will give you His grace to deal with the grief and hurt.    Part of that healing process is releasing them.    Failure to do so will affect  your marriage and other relationships in your family.

When my daughter, Ashley, was married the song “Arrow and the Bow” was sung as my wife and I and Brian’s parents lit the candle before the service.    This song tells the importance of releasing your child. 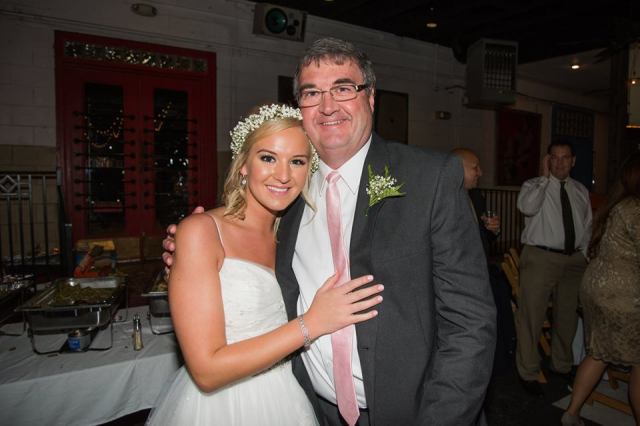 April, on her wedding day.

These are four unique times that involve our children leaving home.   None of them are easy.   Some are much more painful.   Though there can be great joy in the result of doing so, it is still tough.

Perhaps there is another situation that you are dealing with in your having an empty nest.   May God grant you His wisdom and peace as you experience this challenging time.

1 Response to The Empty Nest