Posted on September 14, 2017 by familyencouragement

In a way I’m not fully qualified to write this as I still have a child at home.   On the other hand my wife and I have experienced six of our kids leaving.   My baby girl will be leaving for college in less than a year.   Then, we will officially wear the title of empty nesters. 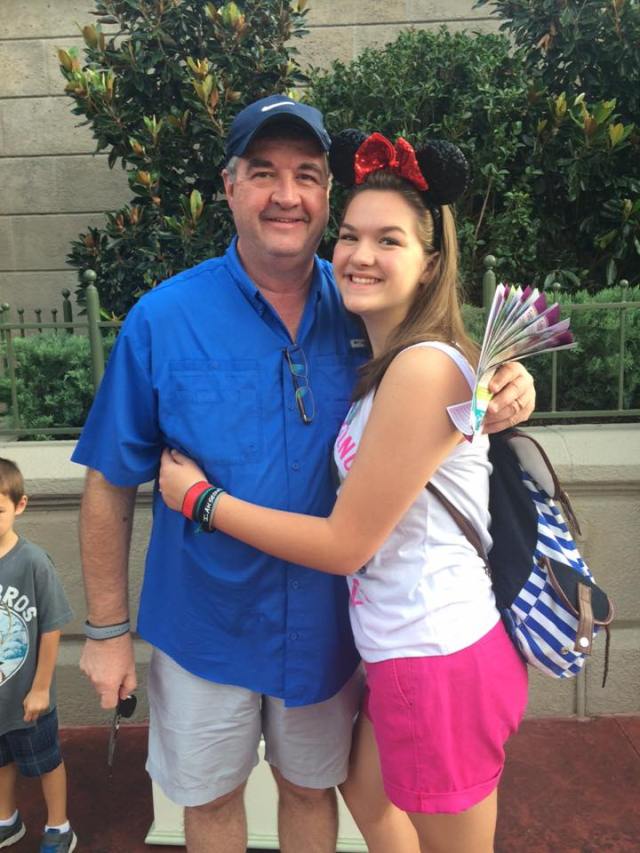 My baby girl, Aubrey Caroline. She brings great joy to my heart.

This principle is crucial to enjoying the empty nest phase of life.   And it is one we have striven to practice in our parenting.

The secret to successfully releasing your child is that you have been gradually releasing them from childhood.  Letting go of the rope a bit at a time is an important strategy.

In the Bible children are compared to arrows and the parents to the archer.    An arrow cannot fulfill it’s purpose unless it is released from the bow.

To release an arrow without a specific objective is a waste.   An archer that is serious about his craft will polish the arrow and protect it’s quills before he points it to the target.

The metaphor is clear.   Raising children requires focus, intention, preparation, protection and the ultimate release of one’s children.   Parenting isn’t easy.   It’s the most difficult thing one will ever do.

But it is also the most rewarding.

When my children married (or left home) my role changed from being in the chain of command to that of a counselor, an advisor.    Until that time we tried to release them by degrees, hopeful they would learn responsibilities we taught and modeled that would help them as adults.

Often people release their children too soon and to the wrong things.   To do so will bring regret and consequences.    Let me mention three mistakes that are most common today we make as parents.

Releasing them to dating when they are 13 years old.   I chose the age of 13 arbitrarily.   It’s a time when parents allow dating when they’re unprepared.  Pressure starts early for your child to have a boyfriend or a girlfriend.

It’s a mistake to release your child to dating at a young age.   I can’t think of any positive outcomes.   I can think of several negative results when it is allowed.

Premature dating has caused a lot of damage to young people where the scars extend even to adulthood.  Children need to be prepared for marriage, not having boyfriends and girlfriends.   The focus should be on friendship, etiquette, serving, extending courtesies, how to hold a conversation and other areas that will contribute to a successful marriage later on.

If you decide to not release them when they’re not ready, you will be bucking the culture and will be misunderstood, but it will save a ton of heartache later on.

Your child may become frustrated, angry and protest when you establish boundaries in this area, but I believe you must if the empty nest would be a blessing.    To be honest, though I believe this and practiced it in our family, it was still a struggle sometimes.   To take such a position is swimming upstream culturally.

Of course, at some point there will be that special someone that will be discovered along the way.   I believe this best happens in the context of a group of friends rather than trying to find “the right one”.    Especially in the early teenage years.

Serious, long-term dating inevitably leads to the next mistake.

Releasing them to go steady when they are 15 years old.   Again, the age I’ve used isn’t as important as the principle.   Dating leads to “going steady”, which simply means the two will refrain from seeing others.   It is sort of a pre-engagement time.

When I was in school some kind of symbol was exchanged to indicate the girl was “off the market” – like a class ring, a letter jacket, or another personal item.

This mistake usually leads to possessiveness, jealousy, frequent fighting, and sexual activity.    The couple will typically break up and get back together several times because the relationship intertwined their emotions when they weren’t fully prepared for such intimacy.

I’m not denying that young people cannot have feelings and like someone; I am saying that there is an emotional immaturity in that time of life.   Focusing on one’s own needs and failing to understand that love is more than an emotional feeling.

This is not genuine love and cannot survive the long-term relationship which is required in marriage.   There’s a reason the divorce rate is so high and this is one of the culprits.

Maturity is a worthy goal, not having a steady to date.

Also, when sexual activity begins it tends to continue until intercouse.   God didn’t intend for the body to stop at a certain point when necking and petting are initiated.     When the glands are active it’s almost impossible to stop from the next step of intimacy.

God designed sex as a good and precious thing within marriage (Hebrews 13:4).    I often taught our young people that “sex is God’s wedding gift”.

Going steady will likely lead to sexual compromises before marriage.

Releasing them to the world when they are 16 years old.   I think that parents get tired around this age and begin to settle for less than God intended.   Parenting is spiritual warfare and it is worthwhile to battle for the hearts of your children.

Beside Nehemiah 4:14 in my Bible I have written, “I will fight for my family”.

The verse reads, “…fight for your brethren, your sons, and your daughters, your wives, and your houses”.

There are three battle grounds that each generation often disagree upon in a family – clothing, friends and music.    We need discernment in each area as parents, but we must not give up on what is right just because we are tired.

Another idea in this season is that “everyone sows their wild oats”.    While we all have sinned and made bad choices the inevitable result of sowing wild oats is the reaping of a wild harvest.    Part of the wild harvest influences not only the young people, but empty nest parents from choices their children have made.

Understand clearly that I’m not assuming that there will be perfection in your parenting or in your children.   It’s ridiculous to even assume such a proposition.   I wasn’t a perfect son to my parents nor have my children been perfect.    That doesn’t mean that we shouldn’t be mindful of God’s design and work toward it.   God’s way is the best way.

The problem is that we have allowed culture to define and influence our parenting philosophy.   God designed the family and tells us how to operate it in His Word.  The Bible gives us clear instructions in the area of parenting, but we often settle for less than God intended.

For example, many parents are happy and satisfied if their kids aren’t on drugs, stay out of jail, and land a good job.  This is a good thing, but these alone are missing the point of God’s intention in parenting

God wants our children to mature not only physically and intellectually, but also spiritually and emotionally (Luke 2:52; Psalm 128).   He gives parents the tools of His Word and grace to accomplish this.    We are to be active participants in this process.

And it’s a painful process, failure often marking both the parent and the child.   A lot of failure.

Let’s not allow the world around us to dictate the terms of how we parent.    We have made some surrenders and are paying the price – both children and parents.

It is a more pleasant and peaceful empty nest when we take care of our children as they grow up.   This means releasing them gradually and intentionally.

When Esau married he was forty years old and he made bad choices about whom he married.   It had an effect on his parents in their later years.

The Bible states that Esau’s family was “a grief of mind unto Isaac and to Rebekah”   (Genesis 26:35).    It’s more difficult to enjoy the empty nest when adult children are bringing problems back into your home.

Better to work hard on the front end and middle part of parenting teenagers than to experience the grief from grown children that have been released too early to areas for which they weren’t prepared.

When my oldest sons were playing Little League baseball I was watching practice early on a Saturday morning.   The coach’s son was a rebellious, cocky boy.   He didn’t listen to anything his dad would say as he coached and was never corrected.   He made it miserable for everyone, even his teammates.

As I observed the display of neglectful parenting on the field, the lady sitting next to me introduced herself as the coach’s wife and asked me who my boys were.   After pointing them out, she said, “I wish my son would listen to us the way your boys listen to you.   I guess some parents are just lucky”.

I sat there stunned and wanted to reply, “No, ma’am, my wife and I aren’t lucky.   We have worked very hard to get our kids to pay attention and respect authority.   I would suggest that your problem with your son isn’t a matter of fortune, but rather that he has lazy parents that refuse to discipline him”.

Though I didn’t say it, it was true.   Sometimes I wonder what happened to this young man.    He’s in his mid-thirties.    I hope he has given his heart to Christ and God has transformed him.   If things haven’t changed he is reaping the consequences.

However, his parents may be reaping consequences of not being diligent and intentional in raising him, only now as a man the cost is much higher.

I almost didn’t publish this post because it exposes my children to criticism from mistakes they have made and my wife and I from our own failures in parenting.   As they grow older the opportunities to sin are more frequent and consequences from bad choices are more destructive.

As a caveat, I readily confess that Paula and I have had our challenges in parenting and my children their own challenges.   I do know we were sincere and intentional and hopefully that has helped our kids and limited the potential sorrow of the future for either of us.

But that doesn’t diminish the truth of the post.

The effort in the early years will pay off not only for your children, but also in your marriage when it comes time for them to leave the nest.    God has not only given you truth from the Bible to do the task, but also His mercy and grace – and we need all three.

1 Response to Release Your Children Gradually