Friends Give Gifts to Each Other

Posted on August 29, 2020 by familyencouragement

A healthy marriage is one where the two are friends.  When a husband and wife lose the elements of friendship, the relationship struggles and becomes dutiful.  This is a dangerous place to be.

The benefit of having a Christian home is access to the life and power of God to be what we ought to be as marriage partners.   He lives in us and through us.   This means we can love each other extraordinarily and supernaturally.

The Bible talks about a kind of love that is called “phileo“, from which we get the word, “Philadelphia“.   It means to have a brotherly love, a relationship that is based on commonalities, as friends.

Sometimes we use words so often that they lose their impact because they have lost their meaning.   We need to take the time to reexamine them and gain a fresh understanding of what they mean.   One of those is the word “friend“.

Many don’t know what it means to be a friend.  Yet, this relationship is foundational to having a strong and close family life; being friends.

In a series of posts I have proposed that friendship has certain characteristics.  Friends are: committed, compassionate, trusting, expressive, and transparent.

“And when David came to Ziklag, he sent of the spoil unto the elders of Judah, even to his friends, saying, Behold a present for you of the spoil of the enemies of the LORD”. (I Samuel 30:26)

After David conquered the enemy he shared the spoil with his friends.   He sent it representatives to the recipients and said, “Behold a present.“!     The word for “present” is the Hebrew word for blessing.   His desire was to bless his friends through benevolent gifts.   (Perhaps clothing, weapons, money, food – whatever, it was a bounty of grace).

These friends were “elders of Judah“; the leaders of various villages and towns that had helped David during a difficult time in his life, while he was running from Saul, who was trying to kill him.

Here was an opportunity for David to return the favor because of their kindness to him.  (The Bible mentions thirteen different towns (I Samuel 30:27-31) where David sent the “spoil“, a long trip.  This was intentional and took a lot of effort on his part.   (A thankful heart will do that!)

David’s thoughtfulness and generosity was motivated by his gratitude to those that had befriended him.   Friends enjoy giving to one another.

Here’s one of my favorite definitions of a gift – “a gift is an altar where the receiver meets the giver and thanks God for them”.   Seeing a gift this way makes the gift one that keeps on giving!    It reminds you of that person and the goodness of God to bring them into your life.

A gift is more than just something that serves a function or that meets a need; it represents the heart of a caring friend.  It says, I am your friend and I care for you.

As I wrote this post my mind was filled with gifts I received and how they deepened my love for those that gave them to me.

One of the most sacred gifts I have is an old upright Baldwin piano that sits in our living room.   A few keys stick and it needs to be tuned, but I still play it some.  My parents bought it for me over fifty years ago when I started taking piano lessons when they realized I had some ability.   They got a discount because it had a little blemish on it.

It’s special because it cost them money they didn’t have and they sacrificed for me.  When you are ten years old you don’t realize the value of things.   As I got older I learned how much they loved me and what they gave up so I could learn to play the piano.

Music has been a balm to my soul, especially in times of trials and burdens.  I have played in every church I have served in since 1977 and in my home church as a teenager.  What a gift from my parents to their little boy.   I see it several times a day and it is an altar that s speaks to me and reminds me of the givers and spurs gratitude in my heart for them.

On my fortieth birthday my wife had packed our bags and was taking me out of town, but wouldn’t tell me where we were going.   Before we left town she informed me that my Mom wanted to see me and we dropped by the high school where she worked.    She came outside to talk with me and soon she had tears in her eyes.  She shared that she and Dad wanted to do something special for me on this birthday and that they were sending me on a trip to Israel with one of my friends.  I was speechless for a little bit.   After that, Paula and I headed southbound and I found myself at Orange Beach with my dearest friend.   Both were memorable trips.   My wife and parents, my friends, gave special gifts to me.   When I recall those memories my heart is drawn to Paula, my Dad and Mom.

I love this picture of Paula! It was taken somewhere near Romney, New Hampshire in the mid-90’s. The White Mountain region is spectacularly beautiful in the fall. Paula is beautiful all the time! I love Paula Mae.

Several years ago I had been going through a very difficult time battling a chronic illness I have.  My two oldest sons banded together and took me to an Atlanta Braves game.   After that we went to Dave and Busters and played a bunch of video games with each other until about 2 a.m.   It was so much fun.  They paid for everything.   I’ll always remember it.  They ministered to their father that weekend.  My sons, my friends.

Minutes after my Dad died, in the room alone with him was Mom, my brother and Paula.   Soon some of the grandchildren came.  My Dad was my hero.   I put my arm around my brother and we quietly recounted some of the things our father had done for us, gifts he had given to us, places he had taken us, and sacrifices he had made.

When I was young I rarely thought about the gifts and sacrifices of my parents.   They bought my clothes, food, cleats, uniforms, paid for my braces, provided for me to go to church camp and hundreds (thousands!) of other things.   I never said thank you sufficiently.   It wasn’t until I was in my later teenage years when I began to see my indebtedness, to some degree.   Now, as a father I know what they gave up to make my life better.

As Hoss and I stood on the third floor of that hospital  room beside Dad’s body, we realized more than ever – our Dad wasn’t just a wonderful gift-giver, He was a gift to us.

I want to give gifts to my wife, my children, and my friends because they are God’s gift to me.   One day the opportunity for me to do so may be gone.   What seems like a chore and an expense will be a regret.

Sometimes we can’t give the gifts we want to give.   We don’t have the resources required.  But my wife and family can receive the gift of my time, my focused attention, the gift of an unhurried conversation, taking them to lunch just to talk and tell them how much I care about them.   Friends give gifts.

As my Mom got older I would drive her home from church and watch her amble up to her door in a characteristic gait she had because of a bad knee.  I captured those pictures in my mind and heart – and I took some on my phone, too.    I took a lot of pictures while she was unaware as she went through her day, aware that one day these privileges would not be had again.   Hoss and Melanie began to do the same; sometimes now we send each other those different pictures of Mom we took. 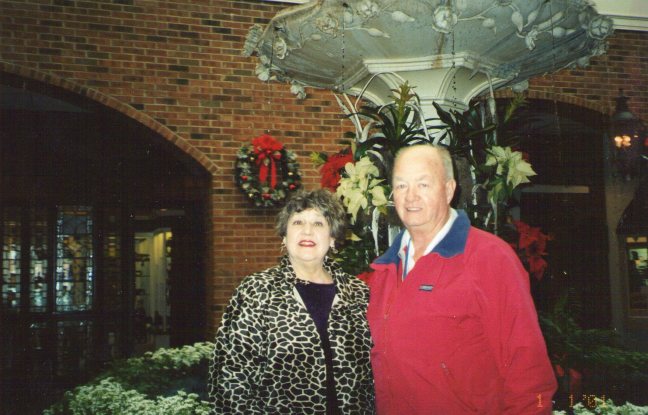 Mom and Dad at the Opryland Hotel in Nashville, Tennessee in the late 90’s. Dad often drove groups there and it was one of Mom’s favorite places to go.

I’m not trying to be morbid, but to make a point.   Mom is in Heaven and though I miss her, she is happier and more filled with joy than she has ever been.   I still have my wife to share life with; I still have my children, their spouses and my grandchildren to invest in and give to; and I still have a ton of friends to pour into as God helps me.   This is what friends do.   They give to each other.